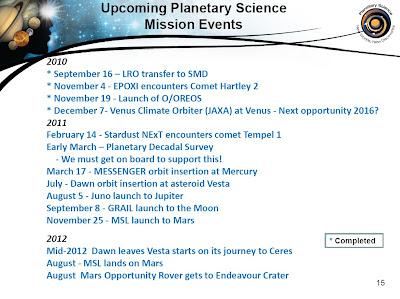 The coming year and a half will be a hell of a ride.  Can't wait!
Approximately twice a year, the National Academy of Sciences Planetary Science Subcommittee meets and reviews status and issues in NASA's planetary program.  The most recent meeting just completed, and I will summarize highlights.  The meetings typically have an update from NASA's headquarters, special presentations on key issues, and updates from the analysis groups (Outer planets (OPAG), Mars (MEPAG), Venus (VEXAG), lunar (LEAG), and small bodies (SBAG)).  You can view the presentations at www.lpi.usra.edu/pss/jan2011

Much of the meeting consisted of status updates, but four issues seemed to stand out:

1) NASA (and most Federal programs) do not know what their budget will be this year or for coming years.  They are reacting by being conservative both by mandate (e.g., no new initiatives such as the restart of plutonium 238 production) and judgement (e.g, being careful not to over commit research grants).

2) There still is no plan to restart plutonium 238, which is essential to exploring the outer solar system beyond Jupiter for simpler missions and at Jupiter for Flagship missions.

3) Launch vehicle costs are rising (see below).  In an era of expected flat to declining budgets, this translates into fewer missions. 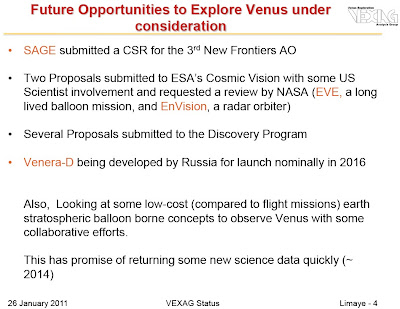 The number of missions being proposed or under development (Venera-D) suggest that Venus may again become a priority destination.  In addition to the  two ESA Cosmic Vision proposals for Venus, I know of proposals for a Titan balloon and a Uranus orbiter.  There are likely additional planetary proposals.  The selected mission would launch in the early 2020s. 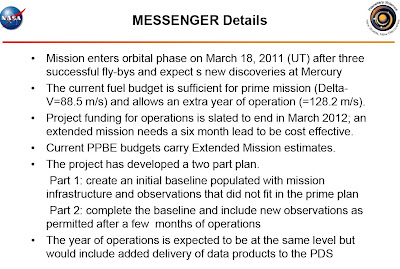 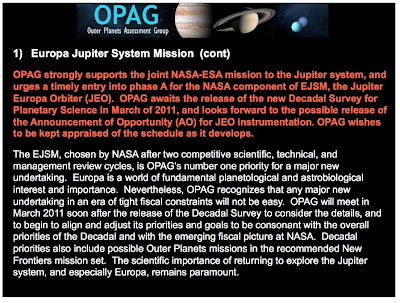 It is possible (probable?) that the Decadal Survey will recommend only one of the two large Flagship missions proposed for the next decade, the Jupiter Europa Orbiter or the MAX-C rover that would cache samples for a Mars sample return mission.  This slide acknowledges that the plans for outer planet exploration may have to be reset if JEO is not recommended. 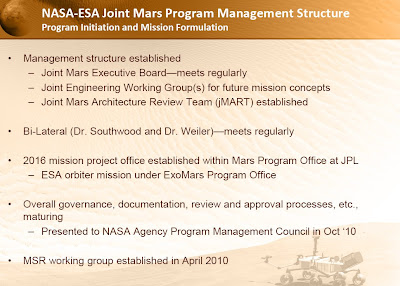 The Mars program has become a joint NASA-ESA program that is planning a sequence of missions that include ESA's ExoMars rover, NASA's MAX-C rover, and future missions to return samples.  The international cooperation may influence the Decadal Survey's recommendations for priority missions.  If Mars missions are not a recommended priority, then the Mars community is likely to be rethinking its program.

An example of the cost increases NASA is facing for launching missions.