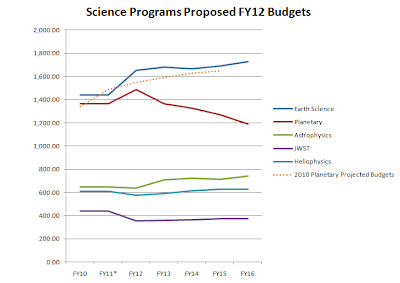 Every year, I do a post looking at the President's budget proposal for NASA and its implications for future planetary exploration.  This year, we have two competing budget narratives: the President's and one from the Republican-controlled House in Congress.


Because the President's just released budget proposal has more detail, we'll begin by looking at it.  For FY12, which starts October 1 of this year, the President proposes to increase science spending at NASA by about $500M compared to FY10.  (There is no approved budget for FY11, and agencies are currently funded at FY10 levels.)  The increase is generally split between Earth Science and Planetary Science with other programs approximately flat.  The bump in the Planetary program appears to be largely devoted to supporting the FY12 costs of the Mars Science Laboratory and the Mars MAVEN orbiter development, which hits its peak funding that year. Beyond FY12, the President proposes to decrease Planetary Science spending, principally by decreasing spending in the Mars and lunar planetary programs.  The Discovery and New Frontiers programs would receive modest increases, and other programs would remain approximately flat.

As I parse the budget, here are implications that come to mind:
In other NASA budget news, the Republican leadership in the House has proposed holding the NASA FY11 science funding (which is still not approved almost half way into the year) at FY10 levels.  While Congress looks at budgets one year at a time, the Republican leadership has discussed a budget freeze in out years, leading to effective slow budget cuts as inflation takes its bite.  If carried through for the next several years, and if funds for NASA's science programs remain at the same proportion as in FY10, this might mean higher Planetary budgets than the President has proposed.


Editorial Thoughts: Budget politics in the U.S. this year should be either entertaining or nail-biting depending on whether or not you depend of federal budgets for funding. The President's proposal probably represents the upside potential, and the House proposal the downside, and a split near the middle certainly is possible.


For readers who are not American, our budget process is interesting.  The President proposes a budget, and then each house of Congress (the House is currently controlled by the opposition party, the Senate by the President's party) writes its own budget.  Then, through negotiations, the three budget writing parties agree on a compromise that is passed as a law by Congress and signed by the President.  When the process doesn't work, the government generally is funded under a continuing resolution that typically extends the previous year's funding levels.


Budget projections beyond FY12 have far less certainty than even the FY12 proposals.  An interesting experiment is to compare last year's projections with this years, as I did with the dashed line in the first figure.  That dashed line represents the projected spending for the Planetary Program in the Presiden'ts FY11 budget proposal.


Correction: A letter written by James Green, Director of NASA's Planetary Science Program, clarifies that the projected budgets for years beyond the current FY12 budget may be increased if necessary to accommodate the Survey's recommendations.  The notes in the budget documents from which I drew my analysis suggested this possibility, but in a political climate promoting flat or declining budgets for federal programs, I did not place sufficient emphasis on this.  I stand corrected, and this position is more encouraging for a vigorous program in the coming decade.  I've retained the paragraphs that follow which appeared in the original post as an analysis of possible implications if future budgets were to decline as suggested by the out year budget projections.


After accounting for the Discovery, New Frontiers, research, and technology programs, there appears to be around $2.5B plus a bit to support additional missions assuming the projected FY16 budget continues through 2021.  A ~$2.5B wedge would probably support the 2016 and 2018 joint Mars missions with ESA.  It might support a scaled back version of the Jupiter Europa Orbiter.  Without the decline in the Mars program budget (which could be targeted to other missions), the wedge might be another $2B+ larger.


In the press call on the budget, the head of NASA's science program emphasized that the implications of the budget of future planetary missions is well understood.  To paraphrase him, they know that there is not enough funding for a full Discovery program, a full New Frontiers program, a full Mars program, a full outer planets program, etc.  The goal of the Decadal Survey is to decide what should be funded within the budgets expected.  The budget amounts and categories above are not fixed.  In theory, the Survey could recommend ending the Discovery and New Frontiers programs to fund Flagship scale missions for Mars and the outer planets.  (Not an outcome I expect.)


The full budget proposal can be read at http://www.nasa.gov/news/budget/index.html.  The figures in the charts are taken from these documents.