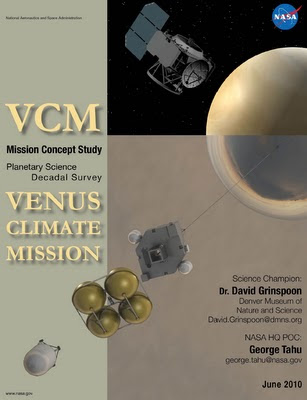 With this post, I'll complete the longer summaries of the Decadal Survey mission concepts.  Barring breaking news, the next post will provide shorter summaries for several remaining concepts.

While two mission studies plus the SAGE New Frontiers proposal looked at landed missions, the Venus Climate Mission (VCM) would focus on the atmosphere.

The design of the VCM mission is to provide answers to the outstanding science questions about Venus' super-greenhouse gas climate system.  Previous missions have left numerous questions unanswered: "VCM will resolve current uncertainties in atmospheric motions, radiation balance, cloud composition and chemistry, while also making elemental and isotopic measurements that will reveal the origin and evolution of the atmosphere and the evolution of the extreme greenhouse climate."  A key goal will be to understand the relationships and feedbacks between these parameters to enable modeling of Venus' climate and other Earth-like planets.  Another key goal will be to understand how Venus' atmosphere transitioned from what is believed to have been Earth-like to the current extreme CO2 dominated greenhouse. 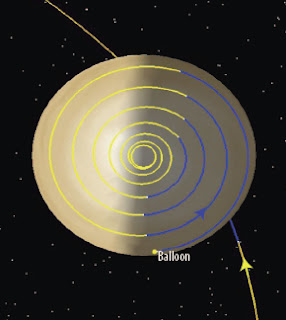 Winds would be expected to carry the balloon system in a spiral to the pole allowing the study across a range of latitudes.
Previous missions have shown that Venus' atmosphere and weather patterns are highly variable across space and time.  The goal of VCM "will be the first ever truly 3-dimensional (and to a large extent 4-dimensional, including many measurements of temporal changes) characterization of Venus’s atmosphere."  VCM would combine several different platforms to examine the atmosphere from the cloud tops to the surface.  A gondola balloon system would float at 55.5 km altitude for long term studies of atmospheric composition, structure, and winds.  A mini-probe would be dropped from the balloon system at the initial entry to descend to the surface to study composition, atmospheric structure, and winds.  Two small drop sondes would be released from the gondola over the course of its 21 day mission to probe structure and wind from the float altitude to the surface at different latitudes and times of day or night.  A camera on the data relay orbiter would track high altitude cloud movements. 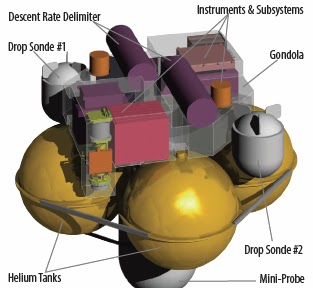 The in-situ VCM elements.  The mini-probe would be released on deployment and the helium tanks would be dropped after balloon inflation.  The drop sondes would be released later to sample different atmospheric conditions from the float altitude to the surface.
Put together, "Simultaneous dynamical measurements from the Gondola/Balloon system and the Mini-Probe and Drop Sondes will allow, for the first time, concurrent measurements of vertical dynamics, cloud particle size and density, and cloud forming species over a wide range of longitudes, solar zenith angles, altitudes and times."

Overall cost of the mission is estimated to fall between approximately $1.1B and $1.6B, which would be slightly more than a New Frontiers mission to a smaller Flagship mission.

Several missions to continue the exploration of Venus' atmosphere from within the atmosphere have been put forward over the last decade.  They range from just a descent probe or a balloon-gondola only platform to multi-element concepts similar to VCM.  The European Venus Explorer (EVE) mission would use international collaboration to deliver a set of platforms that would in many ways be more capable than VCM.  ESA would provide an orbiter with a number instruments to remotely study the atmosphere and surface along with a balloon/gondola that in a summary appears similar to VCM's.  Russia would provide the launch vehicle and a descent probe that would also be a lander.  Japan might provide an additional balloon platform to operate at a different altitude.

Editorial Thoughts: Repeated studies have proposed similar sets of mission elements to answer the key questions about Venus' atmosphere and climate.  The proposals have differed primarily in how many elements were included in response to the possible funding.  Given the climate change occurring on our planet, studying Venus' climate seems a priority to me.  The multi-platforms called for in these proposals would make an international collaboration reasonably straightforward.  NASA, for example, might provide a more capable orbiter, a second descent probe/lander for an EVE, or additional balloons.  Alternatively, Europe could provide a more capable orbiter to compliment VCM's balloon/gondola and descent platforms.   Russia's planned lander would complement either scenario as would NASA's SAGE lander if selected.


Other Venus mission proposals with a strong atmospheric focus: