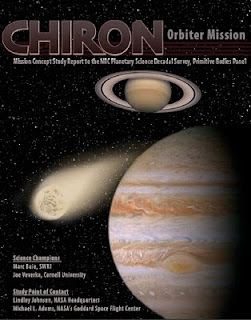 The last couple of months worth of blog entries have focused on Decadal Survey mission concepts to the outer solar system.  Today, I'll look at missions to some of the smallest members of the outer solar system, the Trojan and Centaur objects.  The two populations of small, primitive bodies differ in their location.  The Trojans share the orbit of Jupiter and either lead or trail the gas giant (with the population that leading Jupiter sometimes called 'Greeks').  Centaurs orbit between Jupiter and Neptune and typically cross the orbit of one or more major planets.  (While the term 'Trojan' now refers to any small object in the Lagrangian points of a major planet, here I use the term only to refer to Jovian Trojans.  Trojan objects also have been discovered for Mars and Neptune.)


The use of the term 'objects' is deliberate.  These worlds may blur the distinction between asteroids and comets (a fuzziness not unique to these families of primitive bodies).  Chiron, a Centaur, periodically displays cometary behavior by outgassing.  Other bodies in these families may be mixtures of rock and ice that defy easy classification as either an icy 'comet' or a rocky 'asteroid' and may have wide compositional variation within their populations.  What makes these worlds interesting target of exploration is that they likely are accessible remnants of interesting places in the early solar system.  Two leading theories for the origin of the Trojans, for example, postulate that they are either left overs from the zone in which Jupiter formed or they are Kuiper Belt Objects captured with the migration of Uranus and Neptune out from the sun early in the solar system's history.  Therefore, Trojans either can teach us about the material from which Jupiter formed or they are easily accessible samples of the far outer solar system.  The Centaurs are all in unstable orbits, meaning they have migrated to their present locations recently (in solar system terms).  Their source has not been determined, but leading theories point to populations of objects beyond Pluto.


The authors of both reports spend considerable time discussing options to reach and orbit these worlds -- they are still distant and 'accessible' is a relative term.  In fact, the Chiron report discusses little else.  Several options were examined for propulsion post launch: all chemical, a combination of chemical and solar electric propulsion, and radioisotope electric propulsion.  The solar electric propulsion would be used increase velocity as the spacecraft transits the inner solar system and into the main asteroid belt.  Chemical propulsion (e.g., a rocket engine) would then be used beyond the main belt.  The radioisotope option would substitute additional radioisotope generators for solar power.  This option has the benefit of being able to operate the engines throughout the mission, much as the Dawn mission is doing (using solar power).


The discussion of the tradeoffs was complicated.  The RPG options provided the best performance for all options, enabling a orbiter for Chiron and potentially enabling orbiting two Trojans.  However, this would also be the most expensive option, requiring a Flagship level of funding (and using larger amounts of the limited supply of plutonium 238).  The other options could fit into a New Frontiers mission budget.  The solar electric propulsion option would enable a Chiron mission, but with a reduced instrument payload.  A chemical-only mission was not possible for Chiron, but would be for some other Centaurs and for a Trojan mission. 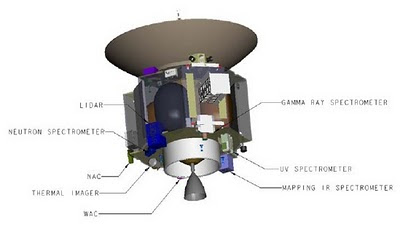 Design concept for a Trojan flyby and rendezvous spacecraft from the Trojan mission concept study.

A mission to either type of object would begin with a long cruise (13 years to Chiron and 8-10 years to the Trojans).  Once a spacecraft reached Chiron, it would orbit for at least three years to both map that world and to detect and study the periodic outbursts.  (A Trojan mission would also search for outgassing from its targets.)  A Trojan mission would have a Jupiter flyby, one or more flybys of Trojan objects, and end with a rendezvous and orbit of an additional Trojan object.  If ASRGs were used to power the craft instead of solar panels, it might be possible to land on the final object.  In this latter case, the Trojan mission would be similar to the Ilion Discovery mission concept. 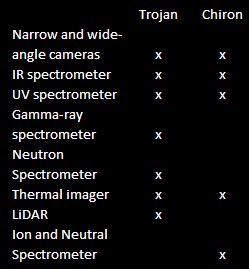 
Editorial Thoughts: A mission to Chiron would be scientifically rich -- this body is unique amoung outer solar system primitive bodies with is large outgasing events.  However, implementing the mission feels to me to be at the edge of what would be technically and financially probable for the next decade.  A mission combining flybys of several Trojans followed by a rendezvous with another seems to be scientifically richer than a mission to a single Centaur object.  Either target would open up the exploration of a new class of world with all the possibilities for discovery that portends.  Whether either mission will be prioritized highly by the Decadal Survey may depend on how the Primitive Bodies Panel ranked these missions against missions to orbit, land on, or collect samples from nearer primitive bodies.


White papers for the Decadal Survey were submitted for missions to both the Centaur and Trojan objects.  In general, the science goals are similar; here, I quote the goals from the Trojan white paper.  I also published a blog entry summarizing the science rational for a Trojan mission here; the rational for a Chiron mission is similar.


"1. Did the Trojan asteroids originate near Jupiter’s orbit or farther out in the solar system?
2. What do compositions of these primitive bodies tell us about the region(s) of the solar nebula in which they formed?"


These questions would be answered by focusing on a set of specific questions for the body (or preferably, bodies) visited:


"1. How much and what types of ice and organics are present on and within Trojan asteroids?
2. What is the mineralogy of the silicates present on and within Trojans?
3. How do the geological processes that have occurred on the Trojans compare to those that have affected other small bodies?
4. What is the relationship between Trojan asteroids and comets, TNOs, outer planet satellites, and main belt asteroids?
5. Are densities and bulk compositions of Trojans diverse or homogeneous?"