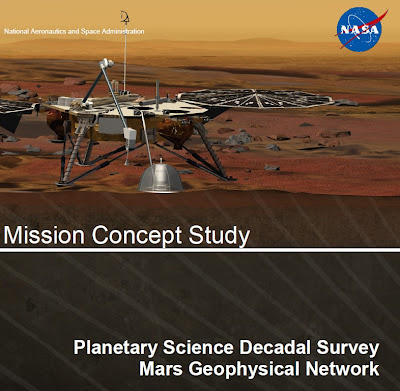 Today I'll begin looking at three mission concepts that I am considering for my the fifth slot in my list of the missions I find most compelling for the next decade.  For this list, I am considering missions that I believe have the greatest chance of fundamentally changing our understanding of our own planet or of the solar system.  You can find the list of the first four missions here.  And again, I'll emphasize that the purpose of this list to stimulate thinking rather than convince anyone that my list is the one correct list.


For the past five decades, we've sent probes to study the surfaces and atmospheres of many worlds.  The interiors of those worlds, however, have remained largely unexplored except through low resolution gravity and magnetosphere studies.  The one exception was the seismographic network left by the Apollo astronauts on the moon in the early 1970s.  While crude by today's standards, these instruments gave us our first detailed look inside another world.  (Just recently, reprocessing of the data from these instruments has revealed that the moon has a liquid core.)  This year, two missions will launch that will further our study of planetary interiors.  The GRAIL mission will create a high resolution gravity map to study the distribution of material within the moon.  The Juno mission will study the interior of Jupiter by mapping its gravity and magnetic fields in high resolution.


Two of the Decadal Survey mission concepts describe missions that would emplace networks of landers to study the interior of either the moon or Mars.  The goals of these missions are similar.  To quote from the Mars concept report, the top priorities would be to: 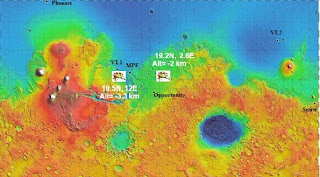 Possible landing sites for a two station Mars network.
Not surprisingly, the list of proposed instruments is similar, with a seismometer getting top billing with precision tracking, heat flow, and electromagnetic sounding instruments rounding out the roster.  The lunar mission would rely on laser retroreflectors for precision tracking while the Mars mission would rely on radio tracking.  The Mars mission also would include a limited number of meteorological instruments to characterize the weather and its effects on the seismic measurements.
To keep the description of these concepts to a reasonable length, I won't describe each instrument in detail, but I will include some tidbits that I gleaned from reading the reports:
The key difference between the two missions would be the number of stations placed on each world: two for Mars and four for the moon.  At a 2009 Mars Decadal Survey meeting, Bruce Banerdt of JPL described what would be gained and lost with different numbers of stations.  One station may provide important constraints on our knowledge of the interior, but would rely on modeling for interpretation to an "uncomfortable degree."  Two stations allow the unambiguous detection of seismic events by recording them at two places and allows their sources to be narrowed to regions.  Three stations provide an incremental improvement, but four stations would be needed to fully address seismological goals.  Similarly, four stations would be needed to fully sample all key Martian regions for heat flow and electromagnetic sounding. 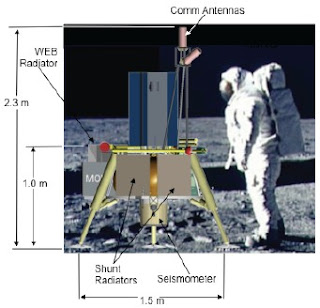 Lunar network station concept (astronaut not included :> )
The lunar network would meet the requirement for four stations.  The Martian network would fall short.  An option to increase the Martian network by an additional station was described in a separate Decadal Mission concept study.  This study looked at additional instruments that could be added to the landing pallet for the 2018 MAX-C and ExoMars rovers.  One option would add a seismometer and basic meteorological instruments.  If this enhancement would be made, the seismic measurements might help tune instruments and analysis on a subsequent mission.  If the additional network stations were flown in the 2020 opportunity, the 2018 instrument might be still functioning to provide a third station. 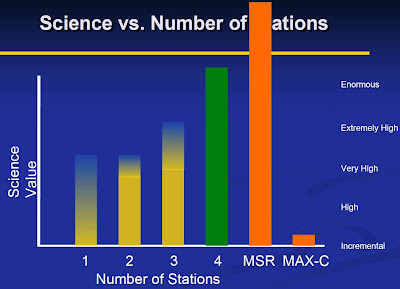 Relative science return of Mars networks with different numbers of stations.
Editorial Thoughts:  The lunar network would be a highly capable mission that would build on the results of the GRAIL mission and extend the data set collected by numerous previous missions to the moon.  The Mars mission as described sounds as if it would be a pathfinder mission, with a full scale network mission still needed at a future opportunity.  The proposed Mars mission appears to be based on a New Frontiers proposal that used the heritage of the then just-flown Mars Phoenix lander.  As such, the study did not look at other lander options that might be cheaper and allow more stations within the same budget.  Europe is planning to demonstrate such a lander as part of the 2016 joint mission with NASA.  Designing descent and landing systems as part of a science mission drives costs and risks up.  I can see why JPL chose to based the concept study on proven technology (the concept studies had to be done quickly and with limited budgets).  By the latter half of this decade, though, that technology will be a decade old and Europe's technology should offer an alternative.  (Note: I don't know if Europe's technology would offer a cost advantage and bring it up only as a possibility.)


The option to enhance the 2018 mission with a minimal geophysical station is intriguing.  Per the concept study, this would add ~$200M to the total mission costs, although cleverness would be needed to keep the total delivered mass within limits.  At this price, this seems like a bargain to me, but a couple of caveats give me pause.  First, the station would be build with single string electronics, that is, no redundancies in case of hardware failure.  That could make operation to overlap a subsequent mission problematic.  For me, though, the bigger concern is that this addition would be the fourth of four priorities for the 2018 mission: land safely, build and operate a capable NASA rover, deliver the ExoMars rover, and implement a pathfinder geophysical station.  If the mission needs to cut costs or weight, I fear that the geophysical instruments could be the first to go.


Network missions make my list of compelling missions to explore because they explore terra incognita: the interiors of worlds with high precision.  What we learn has the potential to change our understanding of how planets formed and evolved.  A lunar mission would provide the richer data set and would compliment the extensive data sets collected by previous missions, especially the GRAIL gravity-mapping mission.  A Martian mission might be more of a pathfinder with just one or two stations, but one that begins the exploration of the interior of another terrestrial planet and that would also compliment an extensive data set.  Either should be a strong candidate to fly in the coming decade.  My choice would be for the Mars mission, but only because of a stronger personal interest in the exploration of that world.

Resources:
The Mars and lunar network mission concept reports can be found here.


The Mars meeting geophysical network presentation (a good overview of the science goals) can be found here.
All images are from these documents.