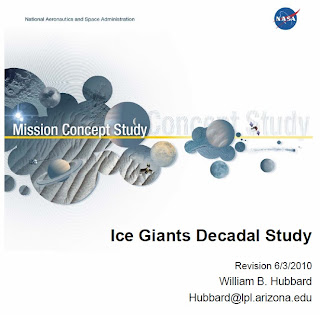 In the reader poll of missions you would like to see the Decadal Survey select, the Uranus Orbiter has been the second most popular larger flagship mission -- but a distant second after the Jupiter Europa Orbiter.  (If you haven't voted yet, please do so!)  This mission isn't one that I am considering for my personal list of five missions I would like to see the survey select.  Given readers' interest and the similarities with the Neptune orbiter missions previously described (here and here), I'll summarize this mission here.  Because of the similarities of Uranus and Neptune, the goals for simple orbital missions to the two worlds would be similar.

Uranus and Neptune offer the opportunity to study worlds that are distinctly different than Jupiter and Saturn.  These two worlds are much less dominated by atmospheres of hydrogen and helium than Jupiter and Saturn.  Instead, they contain much larger fractions of heavier elements believed to have been delivered as ices rather than gases.  Studying these worlds provides an opportunity to understand the formation of planets in a different portion of the proto-solar system.  These worlds also have unusual magnetospheres that are strongly offset from the axis of rotation ( ~60 degress in the case of Uranus and ~50 degrees in the case of Neptune).  The moons of Uranus also show signs of tectonic activity and possible cryovolcanic flows in the case of Ariel.  The larger Uranian moons, Titania and Oberon, may also harbor interior oceans.

The group that produced the Uranus orbiter mission originally was charged with examining orbiter missions for both Uranus and Neptune.  However, one ground rule for the study handed down by the Decadal Survey was that missions much launch no earlier than 2020.  By that time, Jupiter gravity assist options are not available for Neptune missions for a number of years.  While Neptune orbiters could still fly, they would require aerocapture (an untested technology) or unacceptably long flight times.  This study group, therefore, dropped Neptune as a focus and concentrated on Uranus orbiter missions.  (The Neptune study group examined earlier launch dates that would avoid these problems for simple orbiters.)  The lack of a Jupiter gravity assist would impact a Uranus orbiter by requiring a solar electric propulsion stage to reach Uranus within acceptable flight times, which are still long at 13 years with the nominal mission launching 2020 and arriving in 2033 for a mission tour of  1.5-2.3 years. 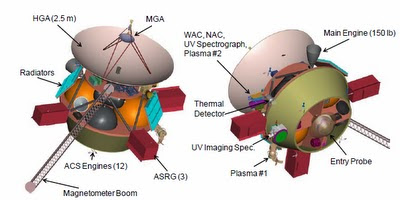 Spacecraft concept with solar electric propulsion stage and orbiter concept design
The baseline mission would include the orbiter and an atmospheric probe that would survive to 1-5 bars (or 1-5 times the atmospheric pressure at sea level on Earth).  The basic mission includes a highly elliptical orbit for observing the atmosphere and exploring the magnetosphere.  Options for an extended mission would provide two close encounters with each major moon (plus four close untargeted encounters with Umbriel) or could lower the periapsis closer to the planet for additional magnetosphere and gravity field measurements.  (It may be that the two extended mission options both could be conducted.) 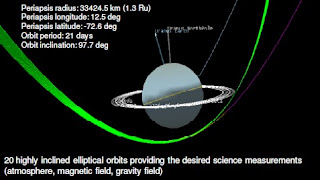 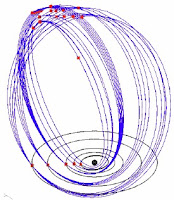 Baseline and satellite tours
Compared to the goal-rich Cassini or Jupiter Europa Orbiter missions, goals for the Uranus orbiter would be modest.  To quote from the concept study (with instruments noted with each goal): 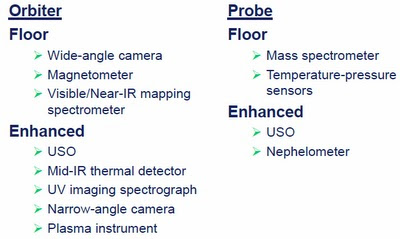 The estimated cost for the full mission would place it in at the lower end of the larger flagship range (~$2B FY15 dollars).  The mission could be descoped to the cost of a small flagship missions (~$1.5B) by addressing Tier 1 objectives only.

Editorial Thoughts:  This would be an exciting mission that would perform valuable science.  The lower cost option (Tier 1 science only) cuts out considerable science.  No relative science evaluations of the two mission options were given.  For Neptune, however, the minimal orbiter (similar to the minimal Uranus orbiter) was judged to have significantly less science value than the full orbiter mission.  Probably not coincidently, the cost estimates for the minimal and enhanced orbiter missions for the two planets were similar.  Similar goals, similar instruments, similar long flight times = similar costs, apparently.