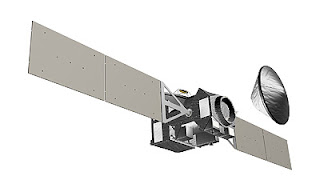 ESA-supplied MTGO orbiter releasing the ExoMars demonstration lander.  Credit ESA.
Earlier this week, ESA and NASA announced the instruments selected to fly on the proposed 2016 Mars Trace Gas Orbiter (MTGO) mission.  This mission has several goals.  It will follow up on discoveries of short-lived trace gases previously discovered in the Martian atmosphere that suggest either active geological processes or life to replenish them.  Another focus will be to continue measurements of the Martian weather and climate to provide context for the trace gas measurements, to aid current landed missions (for example, to predict atmospheric conditions for entry and descent or to monitor dust storms), and to extend similar measurements that currently operating orbiters provide.  A high resolution camera will continue studies of selected spots on the planet in detail.  And finally, the orbiter will carry a communications package to relay data from future landers and rovers to and from Earth. 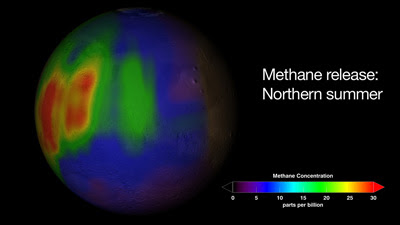 Previously measured methane concentrations in the Martian atmosphere.  Credit NASA.
The detection of methane in the Martian atmosphere has made trace gas measurements at this world a priority.  The discovery implies that Mars is currently active -- methane has a short lifetime in the Martian atmosphere and must be regularly refreshed.  However, the discovery brought with it two mysteries.  First, is the source of the methane geological or biological activity?  Either would have major implications for our understanding of this planet and the latter would have major implications for our understanding of our place in the universe.  The second mystery is what is removing the methane so quickly, much more quickly than known processes could account for?  The issue of trace gases is not limited to methane.  Other important concentrations to measure include CO2, CO, H2O, H2O2, NO2 N2O, O3, CH4, C2H2, C2H4, C2H6, H2CO, HCN, N2S, OCS, SO2, HCl, and CO.

Two instruments will study the trace gases, with the first focused on measuring trace concentrations (it reportedly could detect the the methane emitted by three cows) and the second on the sources of the trace gases:


HiSCI will have lower spatial resolution (2 m) than the current HiRISE instrument (0.3 m), but will cover a larger area in each image.  The HiSCI instrument apparently will have color imaging over the entire image area while HiRISE has just three colors over a 1.2 km swathe and a single color, red, over a 6 km swathe.  Where HiRISE could image only a tiny fraction of one percent of Mars a year, HiSCI will be able to image around two percent per year.  HiSCI will also be able to obtain stereo coverage for every image, while HiRISE must acquire images on different orbits that may be months apart.  (It's not clear if HiSCI will have the stereo channel built into the instrument, or takes a second image on a the next orbital pass.  See the University of Arizona press release for what details are available.)

The orbiter will carry a communications package to relay data from future landers and rovers to and from Earth.

Spaceflightnow.com has an article with additional information on some of the instruments.  You can read the original press releases from ESA and NASA.  A presentation on the goals and implementation of the mission can be found at the MEPAG website.

Editorial thoughts: The status of this mission is currently unclear.  If I understand the Decadal Survey process, this mission must be recommended by the Survey for NASA to proceed with development.  However, I personally think it is unlikely that it won't be recommended.  The communications relay is needed for future Mars landers and rovers and the weather monitoring and high resolution camera would be useful to those missions.  The discovery of trace gases also begs for follow up measurements to determine concentrations and sources.  This is also an international mission, and the Survey would have to ask NASA to cancel plans on which ESA depends to fly its ExoMars mission elements.

You can find more information on the goals and measurement techniques of the classes of instruments selected in a report that analyzed possible instruments for the mission to guide the two space agencies in their final selection.