A Loser in the Astronomy Decadal Survey 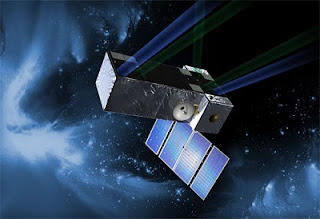 One of my long time correspondents and readers of this blog, left a detailed comment on a recent blog I wrote on the implications of the recently released Astronomy Decadal Survey recommendations http://futureplanets.blogspot.com/2010/08/thoughts-on-astronomy-decadal-survey.html).  Phil takes me to task for not bringing up a key loser in those recommendations, the SIM Lite Astrometric Observatory.  (Phil's thoughts have always proved to be good reading, and I recommend you check them out.)  This mission would have had the capability to accurately measure positions of stars with extreme precision.  A key contribution of this mission would have been the study of nearby stars for exoplanets, potentially as small as the Earth.

Here's a summary of this mission from it's JPL webpage (http://sim.jpl.nasa.gov/whatIsSIM/):

"The SIM Lite Astrometric Observatory is 6-meter baseline Michelson interferometer capable of positional accuracies of 4 microarcseconds all over the sky and 1 microarcsecond for selected targets. SIM Lite addresses foundational problems across all of astrophysics:


The Astronomy Decadal Survey gives little attention to this type of mission, and most importantly does not recommend it for flight in the coming decade despite years of technology development.  Instead, the Survey recommends limited funding in this decade to continue technology development with the potential that this might lead to flight recommendation in the 2020 Survey. The Survey does strongly recommend studying statistical patterns of exoplanet distribution with another proposed mission, an infrared space telescope, WFIRST.  This mission, however, cannot carry out detailed surveys of nearby solar systems that SIM Lite would have.

An on-line article at Scientific American explores the implications of the Survey's recommendations on exoplanet studies in more detail (http://www.scientificamerican.com/article.cfm?id=slow-and-steady-astronomy).

Editorial Thoughts: The SIM mission has a long and checkered history (see the 'Budget' section of the Wikipedia entry on the mission http://en.wikipedia.org/wiki/Space_Interferometry_Mission).  It appears that the real death of this mission came several years ago with NASA science funding was reduced to fund development of new manned space systems.  Rather than killing SIM Lite, the Survey decided not to resurrect it following it's effective transformation to a technology development program.  Because of the cost overruns on the James Webb Space Telescope, the Survey effectively have budget room to recommend just one major space mission.  WFIRST, which can study a variety of astronomical issues including Dark Matter.  WFIRST serves a larger portion of the astronomy community than SIM Lite would have.

Phil is right that this is a loss for planetary exploration that will not be filled for a decade and probably two.

I think the lesson from the probable death of SIM Lite (NASA seems unlikely to go against the Survey's recommendations) is that Surveys have become about hard choices within limited budgets.  I think we'll see similar hard choices in the upcoming Planetary Decadal Survey.  Several key missions many of us would like to see fly may not be recommended.