My post on the Decadal Survey Update: Sticker Shock Ahead has resulted in several readers posting very thoughtful comments on how priorities should be set for planetary exploration.  I encourage you to read them and post your own thoughts.

You may also want to read a post I did early in the year about how different the priorities would be if large missions are chosen versus a series of smaller missions.  Check out My Stab at a Decadal Priority List.  It explains my reasoning behind the lists that follow.

Here are the two lists I came up with:

Example of a priority list and budget for a program that emphasizes Flagship missions.  Figures are in $Bs, and use either published estimates or my own best guesses.  New Frontiers and Discovery figures include the PI budget (~$650M and ~$450M) plus launches and other overhead. 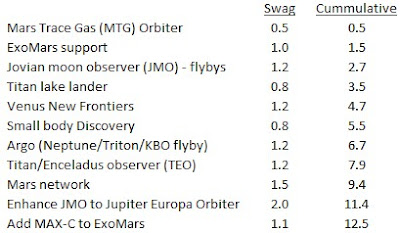 How I would prioritized my list of missions based on mission concepts that have been studied to date.  This list recognizes that budgets may be cut, and has smaller missions that can substitute for larger missions or that can be enhanced if funding continues as currently planned.  Since this list was published, I've learned of the AVIATR Titan plane proposal, and I would consider dropping another mission to fit it in (assuming that the technology is ready for flight, something hard for armchair mission planners to test).

There's of course nothing special about my list, and I publish them to stimulate thought and discussion.  If anyone cares to send me their list, I will be happy to post it.  Please do try to make it fit within the expected budget of $12.5 for the decade (not inflation adjusted).  New Frontiers missions run about $1.4B and Discovery missions about $0.8B after all costs of launching, tracking, and overheads are included.