Summary documents for the President's proposed fiscal year 2011 (which starts this coming October) have been posted.  (For international readers, the budget will be modified by both houses of Congress, then the differences reconciled, and then the President will sign the final bill after possible negotiations with Congress.)

There are two good pieces of news.  First, the budget proposes a 10.8% budget increase for 2011 over the 2010 budget.  The the budget proposes to approximately match the inflation rate (presuming a 3% inflation rate).  If this were to continue over a decade, NASA's purchasing power would increase by approximately $1B, or almost enough to pay for a New Frontiers mission.  In a year where flat budgets are proposed for most discretionary spending, this is a substantial increase.  Depending on the priorities set in the Decadal Survey, this budget increase may have been included to begin serious funding of the Jupiter Euorpa Orbiter. 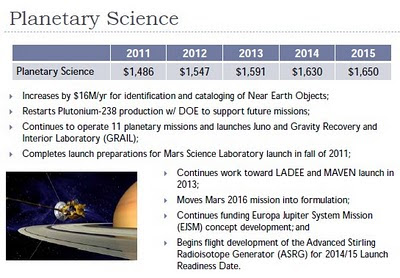 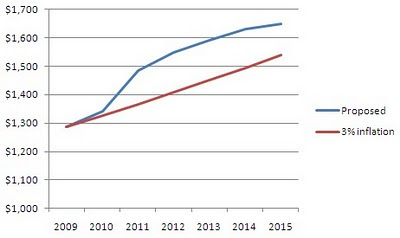 All figures in $Ms.
The second piece of good news is that the budget proposes a series of robotic precursor missions to various solar system locations.  Details on this new program are sketchy at the moment.  Science appears to be a low priority, but for many locations, even a simple camera can lead to new understanding.  It appears that the funding for these missions will come from NASA's Exploration budget, and therefore are in addition to the Planetary budget. 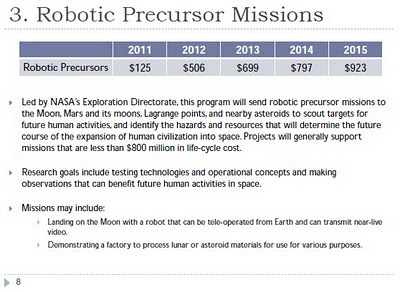 Before celebrating, we should see how this proposal fares in Congress.  In a year when a lot of popular programs will be held to flat budgets, raiding programs that are targeted for increases may be popular.