I'll start with a report on the limitations of the Cassini mission to explore Enceladus (copied from the presentation, 2007 Enceladus Flagship Study):


The proposed LIFE (Life Investigation For Enceladus) mission addresses some of these limitations by flying a Stardust like mission to Enceladus.  Stardust, you'll recall, flew through the the coma of a comet to capture samples of dust that were successfully returned to Earth.  The LIFE mission would adopt a similar mission architecture and mission design philosophy.  The latter focused on designing a mission that fit within the $164M cost commitment (not including launch vehicle).  The Stardust project remained within that cost cap by refusing to accept mission creep.  Worthwhile science investigations were not added if they did not contribute to the core requirement of collecting and returning samples to Earth.  The proposal team does not give a cost for LIFE, but state that they believe it can come in under the previous $1.3-1.8B estimates for a sample return mission. 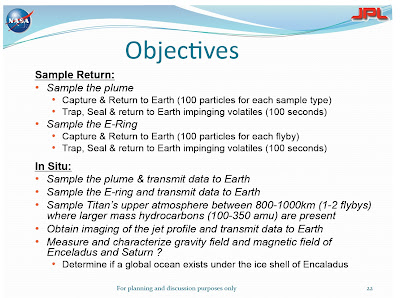 From http://www.spacepolicyonline.com/pages/images/stories/PSDS%20Sat%202%20Tsou-Enceladus.pdf
The LIFE mission would enter orbit around Saturn after an approximately eight years flight from Earth.  The team proposes to encounter Titan one to two times for sampling of its upper atmosphere.  (It's not clear if the sampling would be with in situ instruments or by the collection of material to return to Earth.)  LIFE then would encounter Enceladus' plumes and the E-ring that contains material ejected from the plumes several times at speeds of 3-4.5 km/second (compared to Stardust's 6 km/s).  After collecting the samples, the spacecraft would depart from Saturn on a five year return trajectory to Earth for a total mission duration of 13.5 years.

Samples would be collected by an aerogel collector modified to soften the impact for solid particles plus a 'volatiles trapping and sealing deposition' to collect samples of the gases.  (Aerogel is one of the least dense materials known.  Think of it as super styrofoam that can soften the impact of particles so that they remain intact for analysis on Earth.  The LIFE mission would use a version of aerogel modified to better capture fragile material than was used for Stardust.  I'm not sure what technologies would be used to trap the volatiles.  A volatile collection device was proposed for Stardust but later dropped for reasons that I don't know -- perhaps cost.) 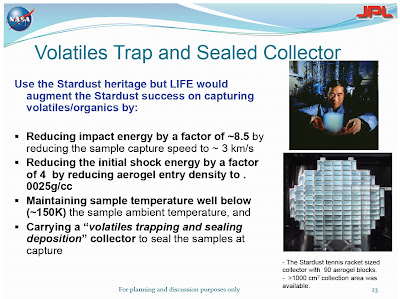 From http://www.spacepolicyonline.com/pages/images/stories/PSDS%20Sat%202%20Tsou-Enceladus.pdf
To preserve the integrity of the volatile samples, the collection system would be kept below -123 degrees Celsius.  However, the presentation points out that even samples maintained at room temperature would still include important dissolved salts, dissolved organics, and insoluble particulates.

To contain costs, the instrument payload would be kept to a minimum.  In addition to the sample collection devices, a mass spectrometer would measure the composition of the gases released from Enceladus and a magnetometer would help measure the internal structure of Enceladus by looking for induced changes in the magnetic field of Saturn.  (It's not clear what the magnetometer would add over what Cassini's magnetometer can already measure.)  Apparently cameras and a dust counter would be considered, but only if they fit within the cost target.  (The presentation is not clear on this.)

Editorial Thoughts:  I like the core of this mission concept.  However, given the long flight times to reach Saturn, I don't think that flying the minimal mission makes sense.  (The tightly focused Startdust mission made sense -- comet flyby mission opportunities are abundant and fairly inexpensive.)  Even if LIFE were constrained to New Frontiers mission costs, the total mission would be over $1B once launch costs and other overhead were included.  I think that the mission needs at a minimum to also carry an ice penetrating radar to directly measure the extent and depth of the ocean believed to lie within Enceladus and be the source of its plumes.  I also think that a minimal remote sensing instrument suite consisting of a visible and thermal imager should be carried.  The former can study the surface structure and pinpoint plume sources while the latter can measure the 'hotspots' that are the connection between the suspected ocean and the surface.  The remote sensing instruments  could be mounted so that they can study the surface during each flyby while samples are collected.

International involvement could help lower the costs of the mission.  One agency, for example, could provide the spacecraft bus while another could provide the sampling system and return capsule.  Instruments could be paid for by several nations.

Look at this blog entry for a description of what kinds of studies a carrier craft could do for Enceladus.

Email ThisBlogThis!Share to TwitterShare to FacebookShare to Pinterest
Labels: Enceladus