Off and on for the last 25 years or so, aircraft have been proposed to explore Mars.  Their advantage has been that they could study long swaths of the surface from elevations of just a few kilometers (compared to hundreds of kilometers for a low orbiter).  Their disadvantage has been that Mars is hard to fly in -- the air at the surface is thin -- limited communications bandwidth, and power/fuel for only a few hours of flight.  The last serious proposal for a Mars aerobot was the ARES proposal for a Scout mission competition.  The mission wasn't selected, and the role of high resolution imaging has moved to orbiters with extremely powerful cameras (really small telescopes), long lifespans, and high data rates to Earth.  (However, no platform has been flown to carry out an plane or balloon's role for in situ atmospheric studies or detailed subsurface mapping with ground penetrating radar.) 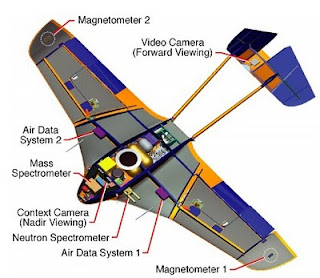 ARES plane design.  Wingspan would have been 6.25 m, requiring three folds to fit within the aeroshell.  From http://www.engr.uky.edu/~bigblue/I2Event/NASA_ARES_REBrief.pdf

Now a proposal has been put forth for a Titan airplane as an alternative to the frequently discussed Titan balloon mission.  Where Mars is hard to fly, Titan would be easy: Low gravity and a dense atmosphere make flight "over 1000 times easier at Titan than at Mars and more than 20 times easier than on Earth". (LPI abstract)"  [I'm no fluid dynamicist, but flying in the dense atmosphere of Titan may be more akin to moving through water than flying as we know it in the comparatively thin fluid known as our atmosphere.]  Essentially perpetual power could be provided by a plutonium-powered ASRG.

Up until this proposal, it has been presumed that in situ exploration within Titan's atmosphere would be conducted with a hot air balloon powered by the much heavier MMRTG plutonium power generators.  While the MMRTG's contain more plutonium and produce more waste heat (useful for heating gases for a hot air balloon), the power-to-weight ratio of these generators was too low for use with an airplane.  The much lighter ASRG units are a "game-changer" enabling powered flight by a propeller driven plane. 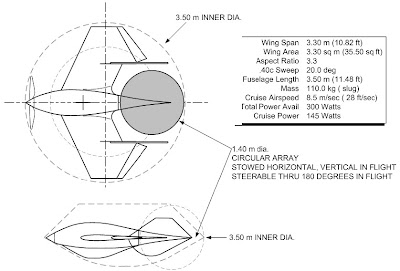 Schematic of proposed Titan plane.  Wingspan would be approximately half that of the ARES plane, allowing easier fit within the aeroshell.  This may be an earlier concept since the antenna appears to be placed outside the aeroshell.  From http://www.info.uidaho.edu/documents/2010%2001%2025%20Barnes.pdf?pid=118467&doc=1
Either a balloon or an airplane platform would be a key element in exploring Titan.  The hazy atmosphere of this moon makes it difficult to image the surface (although some near-infrared spectral windows exist).  The depth of the atmosphere makes it impossible for an orbiter to hug this world the way that Mars orbiters can.  At Titan, an orbiter would maintain a distance of 1500 km compared to the 300-400 km orbits at Mars.  Within the atmosphere, high resolution images and radar soundings of the subsurface can be obtained.  An in situ probe can also make detailed atmospheric composition and weather measurements impossible from an orbiter.

An airplane would have a number of advantages over a balloon:
The plane that has been proposed would be small, around 120 kg, about the same weight as the gondola of the proposed Titan Saturn System Mission Montgolfere.  The published summaries of the plane proposal do not include a list of instruments and talk only about acquiring images.  However, the TSSM planning documents provide a list of potential instruments for the balloon mission that would also be valuable on an airplane (TSSM In Situ Elements pages 53-54):
In general, planetary probes can carry instruments weighing between 10-20% of their weight. Given this limitation, the plane could carry half to the full list compliment of this instrument list.  However, space limitations might further limit the instrument compliment.

The proposers are pitching the mission as a stand alone Discovery or New Frontiers mission that would fly without a supporting Saturn orbiter for communications relay.  They point out that the scientific results would be limited by the bandwidth of the antenna carried within the plane's nose.  They propose that the plane would download thumbnail of the data gathered, with scientists on Earth deciding which subsets of full full data sets would be returned.

The authors of the abstract describing the Titan airplane provide a compelling case for the mission.  The plane "allows directed exploration of Titan’s sand dunes, mountains, craters, channels, and lakes, features of primary geologic interest as evidenced by the number of journal articles on the topics over the past several years. Subsequent imaging can search for changes. The airplane can fly predesigned routes in order to build up large context mosaics of areas of interest, and then swoop down to low altitude to acquire high-resolution images at 30-cm spatial sampling similar to that of HiRISE at Mars. The elevation flexibility of the airplane allows us to acquire atmospheric profiles as a function of altitude at any desired location."  (LPI abstract) 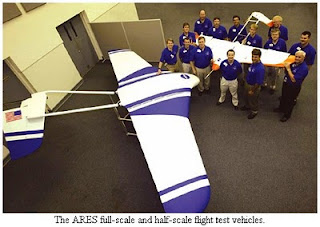 ARES full and half sized test vehicles.  The proposed Titan AVIATR plane would be closer in size to the half sized ARES test vehicle.  From http://marsairplane.larc.nasa.gov/platform.html
Editorial Thoughts:  This is a bold and exciting proposal.  It could significantly enhance our understanding of Titan by providing high resolution studies of the surface and atmosphere gathered over months to years.  The ability to send the plane to specific regions of Titan to fly over the Xanadu highlands, cross the boundary from land to sea, or explore the river channels is absolutely compelling.  The ARES proposal included a video camera (along with more scientifically oriented imagers) that would have allowed armchair explorers on Earth to ride along.

Because the mission builds upon the heritage of UAVs and Mars plane designs, the technology to implement the mission may be mature.  Whether the technology is mature enough for flight is out of my expertise -- who but aerospace engineers could have judged that the proposed designs for Titan Montgolfere were too immature to fly?  There is also the issue of plutonium supply for this mission.  Right now, NASA would have enough for one Discovery mission and the Jupiter Europa Orbiter if Russia honors its contracts, which it currently is saying that it won't.

I am coming to personally favor a set of missions to the Saturn in the upcoming decade.  A Titan atmospheric probe/lake lander would explore the chemistry of both fluid systems.  A New Frontiers-class Titan-Enceladus Saturn orbiter would provide further studies with optimized instruments from a number of flybys of both moons.  And either a balloon or plane (depending on technology maturity) would explore Titan from within the atmosphere.  Preferably, the last mission would fly in conjunction with or after the Saturn orbiter so that the latter could provide a communications relay.

Unfortunately, the solar system is full of compelling targets.  The series of modest Saturn system missions outlined above would total $3-4B if the lander and plane can fit within Discovery budgets and the orbiter within a New Frontiers budget.  Add $3.2B for a Jupiter-Europa orbiter and $3-4B for Mars exploration, and you've spent most of NASA's projected budget of ~$13B for the coming decade and done nothing for exploring Venus, the moon, asteroids, or comets.. The Decadal Survey will have tough choices between excellent missions.

ARES Mars Scout Proposal  The first video at http://marsairplane.larc.nasa.gov/multimedia.html#videos is nice overview of the ARES proposal.

Titan Science from a Saturn Orbiter