VEXAG (Venus Exploration Analysis Group) was established by NASA "to identify scientific priorities and strategy for exploration of Venus."  Over the last two years, it has developed a robust, full fledged Venus flagship mission consisting of a highly capable orbiter, two balloon platforms, and two landers that would survive on the surface for a day and bring surface sample into the lander for analysis.

The mission also has been estimated to cost over $3B, putting it outside what NASA likely could afford in the coming decade given plans for an aggressive Mars program and the Jupiter Europa Orbiter.  A group of scientists has proposed a lite version of the mission call the Venus Climate Flagship.  Preliminary estimates put the mission at perhaps $1.7B. 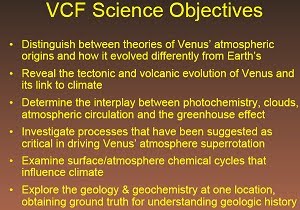 To achieve those costs, the orbiter would have a less capable radar imager and the mission would fly a single balloon and lander.  The biggest change would be that the lander would no longer bring samples into the craft but would instead remotely study the surface chemistry through gamma ray spectrometry and Laser Induced Breakdown Spectroscopy (LIBS) with a Raman spectrometer.  With this technique, a laser would vaporize surface material and spectrometers would analyze the resulting gases.  (The Mars Science Laboratory will carry an LIBS instrument.  Lab experiments have shown that the technique should work on the surface of Venus.  Combining an LIBS instrument with a Raman spectrometer would enhance the analysis capabilities.) [The proposed lander sounds very much like the SAGE lander that is a candidate for the next New Frontiers mission.]

Editorial Thoughts: This proposal seems to retain the critical elements necessary to move Venus science forward.  I suspect that the $1.7B price tag would still be hard to fit in NASA's budget for the coming decade.  However, the capabilities proposed could be implemented by a consortium of space agencies.  Both ESA and Russia are pursuing joint programs, and the latter has announced plans for the Venera-D lander for mid decade.  I would like to see NASA dedicate $750M to a $1B to Venus exploration, with the specific mission chosen to maximize synergy with contributions by other agencies.