The Decadal Survey's Steering Committee met in late November to consider a number of topics that affect the entire planetary science community.  For two key areas, the news is bad.

The first area relates to Russia's decision not to continue sales of plutonium 238 to the United States to support the latter's planetary exploration program.  In addition, the U.S. Congress decided not to fund a restart of P-238 development in the FY10 budget.  (It's not clear to me whether this latter decision was due to uncertain NASA needs -- much of the planned need was for human lunar exploration that seems in doubt -- or whether the hit of the additional cost should be borne by NASA or the Department of Energy.)  As the chart below shows, the combination of these actions -- unless reversed -- effectively ends NASA's use of plutonium power supplies sometime in the near future.  Exactly when depends on how NASA decides to use any remaining plutonium.  The new ASRG technology could enable several small to medium several missions or the Jupiter Europa mission.  However, this technology is unproven in flight and has a 14 year lifetime, a key limitation for missions to the outer planets.  At this point, NASA is not willing to implement the $3.2B Jupiter Europa orbiter mission using unproven ASRG technology. (Editorial thought: If this continues and Russia does not resume sales, then NASA may be in a position of approving several small missions that would use ASRGs and use up the remaining supply.) 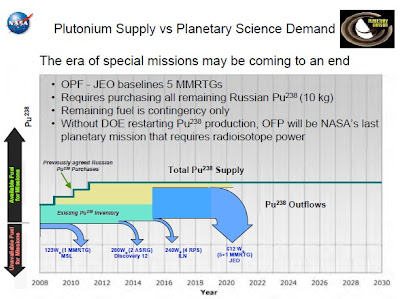 The second piece of bad news comes from launch vehicle costs.  Here, the planetary program appears to be hit from two directions.  First, the medium class (read low cost for planetary mission) Delta II launcher is being phased out without an apparent successor.  This means that NASA must launch even small planetary missions on expensive heavy class launchers.  Second, the U.S. launch business has essentially a single customer -- the U.S. government -- since commercial customers have almost entirely moved to foreign launchers.  This limits the ability to amortize costs over many users.  The $450M MAVEN Mars orbiter will have an additional cost of $212M for the launch vehicle.  To give an idea of how quickly costs are increasing, just delaying the MAVEN launch from 2011 to 2013 resulted in an increase in launch vehicle costs of $57M.  One partial solution would be to use foreign launchers, but the U.S. Congress seems reluctant to ship hundreds of millions of dollars to foreign suppliers.  (And moving planetary missions to foreign launchers would just increase the costs of other U.S. government launchers, many of which are military and would not be moved overseas.) 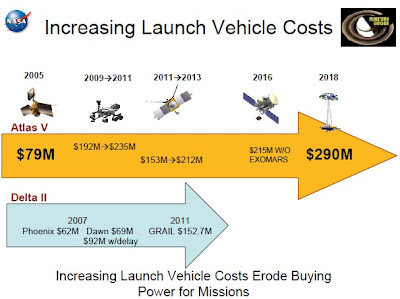