Bruce Moomaw found the time to pull some more information out the the SAGE presentation (see link below), so I'm reposting this with his additions (in italics).


At the October VEXAG meeting (presentations were posted just a few days ago), Larry Esposito the principal investigator for the proposed SAGE lander presented some details of the mission.  In addition to the information in the slides reproduced below, there were several interesting tidbits:


In addition to Esposito's presentation, the meeting also had a short presentation on LIBS/Raman instruments for Venus.  Check it out if you want to know more about this approach.


I suspect that arm is going to extend straight down from the side of the craft to grind into the surface, which would explain how the Microscopic Camera could obtain "views of the excavation area" with maximum resolution.  Whether the tiltable LIBS/Raman instrument will swing its viewfield farther out from the spacecraft or just sweep it from one side to the other is unknown to me.

Page 10 of that presentation includes the listed acronyms of the onboard experiments, which I translate as follows:

DPC/MC = Descent-Panoramic Camera/Microscopic Camera.  (The Descent Camera part of this package will take "NIR" -- that is, near-IR -- images of the suface during descent; if taken through several different filters, it could also provide some mineralogical data.)

NAGRS = Neutron-Activated Gamma Ray Spectrometer.  (This instrument would both measure natural gamma rays from uranium, thorium and potassium in the surface, and -- when the vacuum-tube neutron source is on -- it would measure a very wide variety of other elements, including trace elements.  It would presumably be located inside the lander's body and might analyze as much as a cubic meter of material underneath the lander.  Note also from the little bar chart of instrument operating altitudes on page 12 that it would start its natural gamma-ray measurements as high as 60 km above the surface.)

LIBS/Raman = Laser-Induced Breakdown Spectrometer and Raman spectrometer.  (This instrument, as noted by Van, would use brief bursts from one color laser to strike sparks of glowing plasma off the surface material and take visual spectra of them for detailed major and minor element analysis, and another color laser to scatter traces of "Raman scattered" light off the surface and analyze their spectrum to obtain really detailed and comprehensive data on the mineralogy of the surface.  A LIBS spectrometer is carried on the Mars Science Laboratory, and a Raman spectrometer on ExoMars -- the latter in part because Raman is also good at detecting trace organics, although not nearly as good as mass spectrometric analysis.)

Note that the "excavation sampling arm" (which has "calibration targets" on it, doubtless for the LIBS/Raman instrument) would grind 3-10 cm into the surface depending on surface hardness.  I don't know how they'll decide when to stop grinding -- probably a combination of grinding time and penetration depth -- but, given that Venus' surface is likely very intensely chemically weathered by that superhot and high-pressure CO2 atmosphere and its trace gases, trying to expose and analyze an unweathered (or at least less weathered) surface is very important.

The science payload is significantly different from the one on SAGE the first time it was proposed.  In particular, that first time it carried a combined X-ray diffractometer and X-ray fluorescence spectrometer -- in fact, exactly the same "CheMin" instrument as on the MSL -- for its element and mineralogy analysis, which required a big heavy setup of sampling drill and airlock to take a Venus sample actually inside the hull.  The new combination of NAGRS-LIBS-Raman should get much the same data with a much lighterweight and less vulnerable package of equipment. 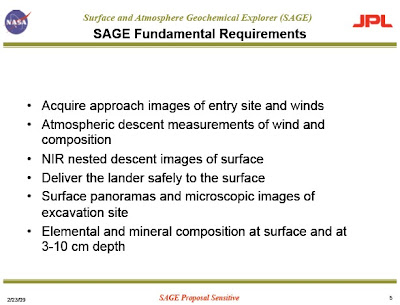 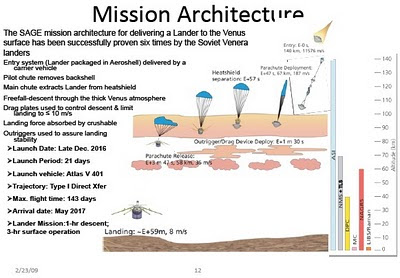