The VEXAG meeting last October (presentations were posted just a couple of weeks ago) had presentations on Russia's Venera-D mission and ESA's possible European Venus Explorer (EVE).   Both are in the definition stage, with the Russian mission apparently funded and a European contribution under consideration.

The Venera-D mission at its most expansive would consist of a capable science orbiter, a lander, and several balloons, and one or more drop sondes that would profile the atmosphere (and take descent images?).  This would be a very sophisticated mission.  A group of U.S. scientists considered a mission of similar scope, the Venus Climate Flagship (or Flagship Lite), and estimated its cost to be $1.7B.  Russia ended its presentation with a slide that read, "We Invite Everybody for Cooperation," suggesting that it would like to share the expenses. 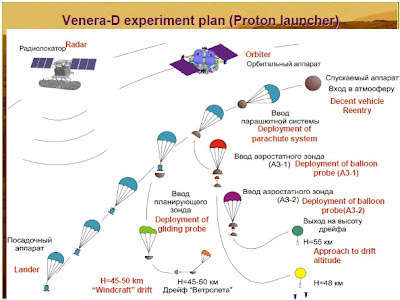 From the Venera-D presentation.  This scenario appears to be the most ambitious of several configurations of the mission under consideration.

ESA is considering contributing to the mission by providing a balloon platform that would study the upper atmosphere for seven days.  Apparently Japan is considering a second balloon platform that would explore the mid atmosphere.  (It's hard to tell how serious ESA's consideration is.  The presentation to be originally from mid 2008.  EVE was not selected as a candidate for the next round of mission selection.  However, I've read that interest in contributing to Venera-D is growing in Europe.) 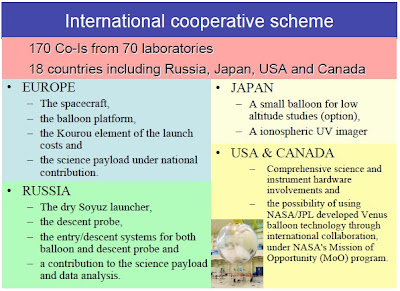 From the European Venus Explorer Exploration

Editorial Thoughts: The Venera-D mission is ambitious and would significantly advance our knowledge of Venus.  It's not clear how important international participation would be to see it fully implemented.  If Europe decides not to participate, the mission likely would be less ambitious.  It's not clear how Russia might reduce the scope of the mission.  It might drop the balloon element, or alternatively it might implement its own balloon platform and reduce the capabilities of the orbiter, for example.

NASA's role in the proposed Russia-ESA-JAXA mission apparently would be minor.  However, NASA could potentially make significant complimentary studies.  If the SAGE New Frontiers lander were to be selected, then the NASA and Russian landers could be sent to complimentary sites.  (It appears from the Venera-D presentation that the landers would have similar capabilities.)  Both missions would launch in 2016.

In addition, the Venera-D orbiter apparently would not carry a mapping radar instrument (although a sub-surface sounding radar might be carried).  A NASA mission such as the proposed RAVEN Discovery mission could fill this hole and re-image Venus' surface.

Venus is currently being explored by Europe's Venus Express mission, and Japan will soon launch an orbiter to study the climate.  Combine these missions with Venera-D and possibly a NASA mission or two, and our knowledge of Venus could see the kind of explosion that has come from the series of Mars missions over the last decade and a half.