Why a Comet Sample Return is So Hard

The small body science community has ranked a comet sample return as its top priority for the last decade or so.  This mission was included (optimistically, for reasons explained below) in the first set of mission candidates for the New Frontiers (~$650M) missions and remains on that list.  In the current Decadal Survey, the goal of the community appears to secure funding for serious technology development to enable fhe mission for the following decade.

A recent presentation to the Decadal Survey Small Bodies panel (http://www.spacepolicyonline.com/pages/images/stories/PSDS%20PB2%20Weaver.pdf) illustrates why this mission is so hard.  The first requirement, to keep the ices collected frozen, may be the hardest.  It is the ices and their record  of the early solar system's volatile inventory that makes this mission so valuable.  The samples, however, have to be kept frozen during the collection, then within the sample return capsule for the long flight home, during the atmospheric entry, and finally during the capsule retrieval. 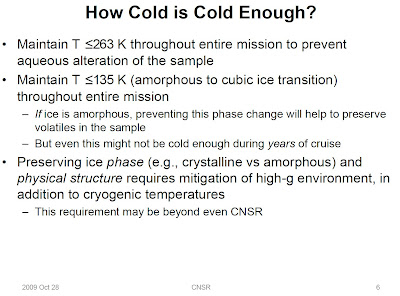 (The freezing temperature of water at sea level is 273 K).
Another challenge is design the mechanism(s) that will collect the sample from potentially meters inside the comet.  A recent examination of technology obsticals for sampling near Earth asteroids (http://futureplanets.blogspot.com/2009/10/parting-look-at-primitive-body-sample.html) put it bluntly: it is not clear how to design a reliable sampling mechanism for near Earth asteroids.  This is probably even more true when your goal is not to sample the surface of a rocky asteroid, but to sample at depth a mixture of ice and rock. 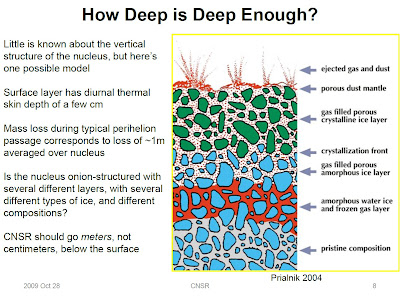 A third challenge is that we know little about the surface of comets.  We know only that they exhibit a wide range of geomorphologies.  Whether that diversity extends a variety of surface and near surface types at the scale at which a lander would sample is unknown.  This simply makes designing the sampling mechanism that much harder.  The Rosetta mission's lander will tell us a great deal about the surface of one comet, but even if we can rely on its data for all comets, the answers could not be incorporated into a mission that would fly before the end of the coming decade at the earliest. 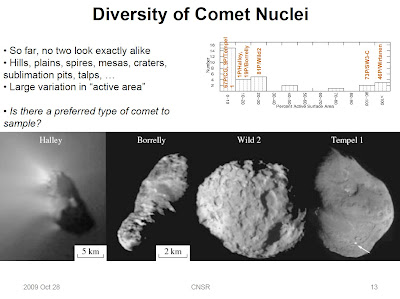 It now seems to be generally accepted that returning a frozen sample of a comet is beyond the scope of a New Frontiers class mission and is probably is a $1-2B mission.  In recognition of this, NASA is now willing to allow a mission that returns a dust sample plus the thawed remains of any volatiles:


"Scientific community interest in a Comet Surface Sample Return (CSSR) mission has been very high for many years. The advantages of such a mission have been stated in many documents including the decadal survey. Flyby missions to comets are fairly simple, and the Deep Space-1, Stardust, and Deep Impact missions have produced remarkable data. Rendezvous missions such as the ESA’s Rosetta mission (Figure 2.3) are more challenging, and a sample return mission can take twice as long as a rendezvous mission, thereby increasing cost and risk. The decadal survey concluded that bringing back a warm (i.e., non-cryogenic) sample was within a New Frontiers mission budget. While cometary science goals make the return of a cryogenic core sample highly desirable, such a mission may not fit within the fiscal limits and programmatic timescale of the New Frontiers Program. The science yield from a warm sample return mission will have to be strongly defended by proposers."
From Opening New Frontiers in Space: Choices for the Next New Frontiers Announcement of Opportunity (http://www.nap.edu/openbook.php?isbn=NI000529)
One Discovery mission proposal would collect only dust samples at low velocity from the comet's dust streams during a rendezvous (http://futureplanets.blogspot.com/2009/09/comet-coma-rendezvous-sample-return.html).