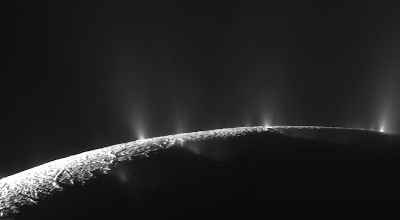 Cassini's surprise discovery of active plumes on Enceladus has made that moon a priority target for future exploration.  The key question is whether their is an internal ocean that might -- like an internal ocean might within Europa -- harbor life.  Even if Enceladus turns out to be lifeless, the existence of the plumes provides an inexpensive opportunity to sample the interior of an ice world.

Two Decadal Survey White Papers address science goals for future Enceladus exploration.  The first, The Case for Enceladus Science, lays out the key scientific questions that future missions would address.  If the Saturn Titan System flagship mission (~$3B) eventually flies, these questions will guide the planning of its Enceladus encounters.  However, a flagship mission will not arrive at Saturn for at least another 15 to 20 years.  Several of the authors of the science paper contributed a second paper, The Case for an Enceladus New Frontiers Mission to propose a mission that might launch in the coming decade. (New Frontier missions cost ~$650M.)

This mission would use solar power and batteries to avoid the costs of a plutonium power supply.  Just four instruments would be flown:

The White Paper goes on to specify a number of mission requirements to fulfill the science goals.  For example, the Enceladus Observer (to give this mission a name) would need at least 12 enounters at 100 - 200 kim altitude at various latititudes including both poles and the equator to determine core size and crust thickness.  Pointing accuracy of the cameras would need to be 2 mrads to accomplish the imaging goals.  Several flights through the plumes would be required.

After a 9.4 year flight to Saturn, the mission begins with four Titan encounters that set up the Enceladus encounters, which would typically occur at 4 km per second every 6.85 days.

Editorial Thoughts: I suspect that many of the readers of this blog imagine missions they would like to see fly.  I'm no exception, and this is a mission I would like to see fly -- with a few modest enhancements.  First, I'd like to see a near IR imager added that would be optimized to image Titan's surface through the spectral windows in it's clouds.  And second, I would enhance the mission's satellite tour.

For the latter, I would include more Titan enounters to study its surface and upper atmosphere.  (The White Paper states, "Titan science could also be accomplished with a spacecraft studying Enceladus, during many Titan flybys.")   Then there would be a series of Enceladus encounters to fulfill the core Enceladus science much like those outlined in the White Paper.  An extended mission could significantly enhance the science return.  New astrodynamics studies have found that two years of encounters with Rhea, Dione, and Tethys would lower the Enceladus encounter speeds to ~1 km per second for around 50 encounters per year.  Encounters with the other moons of Titan with this instrument set would allow comparative studies among the medium sized moons of Saturn.  It's possible that the mission could end with the spacecraft entering orbit around Enceladus, again thanks to astrodynamic methods developed in the last few years.

And while I'm day dreaming, I'd like to see the mission enhanced to the small Flagship class (~$1B) by carrying a Titan lake lander that might be supplied by ESA.  While I understand why Jupiter-Europa were prioritized over Saturn-Titan-Enceladus for the coming decade (technology readiness), I would like to see both an observer-class orbiter and a lake lander fly in the next decade.  Twenty years is too long too wait.

Email ThisBlogThis!Share to TwitterShare to FacebookShare to Pinterest
Labels: Enceladus