A team has proposed a clever new way to measure the physical properties and composition of the Martian atmosphere with high resolution.  The approach could significantly enhance the proposed Trace Gas Orbiter mission. 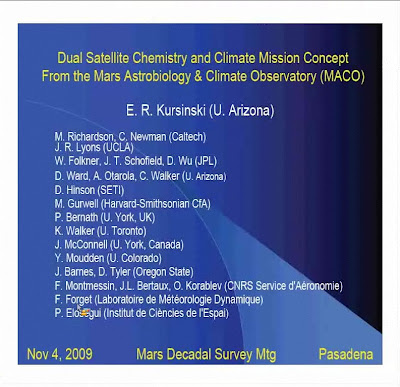 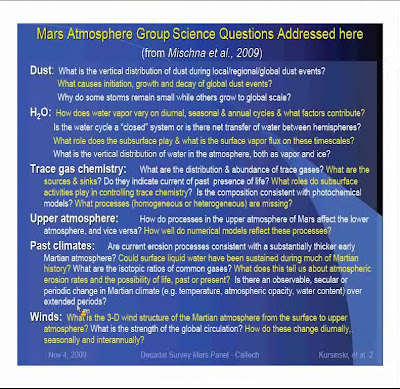 Goals for the study of Mars' atmosphere
Studies of the Martian atmosphere have remained a high priority for a number of reasons: To provide a comparison to our own planet's climate and weather, as a record of the evolution of Mars, as evidence of current biological or geological activity, and to understand the conditions that probes will encounter during their entry and descent to the surface.


Satellite studies of the Martian atmosphere traditionally have used spectrometers, radiometers, and radio tracking to measure the atmosphere.  All are time tested methods.  The first two are used by satellites to measure temperature and composition for our own atmosphere.  The last method has been used widely at planets with atmospheres (even with atmospheres so thin that they are almost vacuums) and use shifts in radio transmissions from the spacecraft received at Earth to measure values such as pressure and temperature.  All three methods have their limitations.  Spectrometers and radiometers integrate data from large volumes, and hence lack spatial precision.  Radio tracking is limited to locations where the spacecraft's orbit or trajectory carry it behind the atmosphere and don't use optimum frequencies for atmospheric studies. 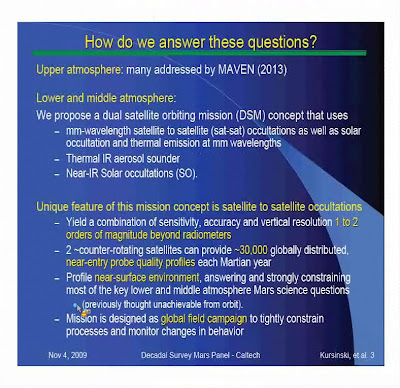 A team led by E.Robert Kursinski of the University of Arizona has proposed a Mars mission that cleverly addresses a number of key measurements.  Called the Mars Astrobiology and Climate Observatory (MACO), the mission would send to orbiters to Mars.  The satellites would use spectrometers and radiometers for traditional atmospheric studies much like the proposed Trace Gas Orbiter would to measure atmospheric structure and composition.  The clever part is that the spacecraft would transmit a milimeter wave signal to each other in a manner reminiscent of radio tracking.  The choice of millimeter wavelengths, however, makes it a much more sensitive probe of the atmosphere for key trace gases than are the frequencies used for radio tracking. 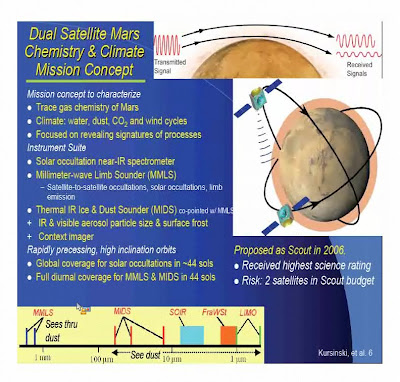 The orbits of the two craft would be chosen to enable approximately 30,000, globally distributed profiles of the atmosphere per year.  The quality of the data from each profile would be similar to that which a dedicated atmospheric entry probe might gather.  For example, measurements of near surface conditions would be accurate to approximately 100 meter strata.  Spectrometers and radiometers, by comparison, measure values for strata an order of magnitude or two larger.  These satellite-to-satellite techniques are beginning to be used for satellite to satellite Earth measurements, so the theory is sound and the research community has experience with the techniques.

MACO was proposed for the 2006 Scout mission selection.  It received the highest science rankings, but the reviewers believed that it was unlikely to be implemented within the budget.  The team is now educating the Decadal Survey on the science and implementation options in the hopes that it will receive a high priority.  A new variant of the mission is also being studied.  The original proposal had two highly capable spacecraft.  The new variant would have a primarly spacecraft and a small sub-satellite that would transmite the millimeter wave signal to the main spacecraft.

Editorial Thoughts: The improvement in measurement precision (both of trace gas abundances and spatial resolution) appear to me to be quite significant.  (Full disclosure: I'm not an atmospheric remote sensing scientist.)  If the claims are solid, then I think that the proposed 2016 Trace Gas Orbiter mission would be significantly enhanced at a relatively minor cost by adding the sub-satellite.  I think this is a clever proposal and hope it will be seriously evaluated by the Decadal Survey.

Resources:  The presentation has been uploaded to the web only as a webcast.  You can view the entire webcast (several presentations) here: https://admin.na6.acrobat.com/_a825035659/p94309391/ .  Look for this presentation to begin about 3:10 hours.

A White Paper on this mission was also submitted to the Decadal Survey: http://mepag.jpl.nasa.gov/decadal/Kursinski_Dual_Satellite_sign.pdf