We are all familiar with large dollar (or Euro, Yen, rubble, etc.) figures attached to missions for their costs.  Rarely do we see a break down of where mission dollars go.

A presentation on the Mars Astrobiology and Climate Observatory breaks down the costs of one mission proposal. 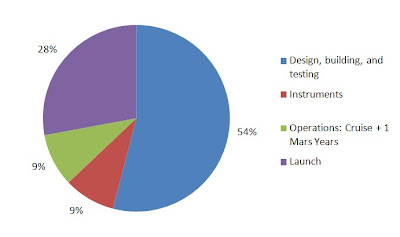 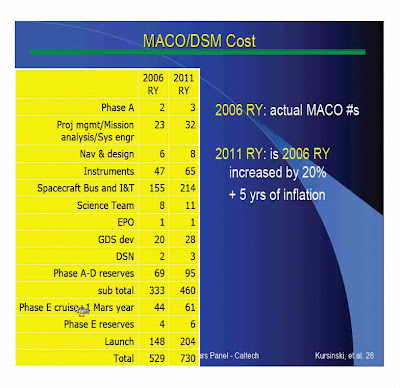 Costs from the mission presentation.  2006 costs were those from a 2006 Mars Scout proposal that were judged to be too low
As with many missions, there are some unique aspects to this mission.  First, there are two nearly identical spacecraft, so there are dollars for extra parts purchases.  However, the nearly identical designs allows the design and testing dollars to be shared across both spacecraft.  I've read that the cost of a second nearly identical craft is around an additional 60%.  (Sometimes I've seen lower figures, but those seem to be for missions that have hot, flight ready spares so duplicate systems and even entire craft are already figured into the base mission costs.)

The MACO mission proposed to fly just three instruments, resulting in fairly low instrument costs.  (I've seen estimates for individual instruments easily top the figure for this mission.)  This mission also has relatively low data rates and moderate pointing costs.  If a high resolution camera were to be added, costs would likely increase significantly to provide the spacecraft stability and aiming to point the camera accurately.  A more capable data storage and communications system would be needed to handle the much larger data stream.

Resources:  The presentation has been uploaded to the web only as a webcast.  You can view the entire webcast (several presentations) here: https://admin.na6.acrobat.com/_a825035659/p94309391/ .  Look for this presentation to begin about 3:10 hours.
A White Paper on this mission was also submitted to the Decadal Survey: http://mepag.jpl.nasa.gov/decadal/Kursinski_Dual_Satellite_sign.pdf