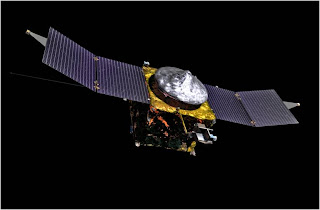 Science@NASA has a nice article on the motivation behind the 2013 MAVEN mission to study Mars' atmosphere.  To whet your appetite, here are a couple of quotes:

"Nov. 6, 2009: Once upon a time — roughly four billion years ago — Mars was warm and wet, much like Earth. Liquid water flowed on the Martian surface in long rivers that emptied into shallow seas. A thick atmosphere blanketed the planet and kept it warm. Living microbes might have even arisen, some scientists believe, starting Mars down the path toward becoming a second life-filled planet next door to our own.
But that's not how things turned out."

"One way or another, scientists believe, Mars must have lost its most precious asset: its thick atmosphere of carbon dioxide. CO2 in Mars's atmosphere is a greenhouse gas, just as it is in our own atmosphere. A thick blanket of CO2 and other greenhouse gases would have provided the warmer temperatures and greater atmospheric pressure required to keep liquid water from freezing solid or boiling away."

"MAVEN will be the first mission to Mars specifically designed to help scientists understand the ongoing escape of CO2 and other gases into space. The probe will orbit Mars for at least one Earth-year. At the elliptical orbit's low point, MAVEN will be 125 km above the surface; its high point will take it more than 6000 km out into space. This wide range of altitudes will enable MAVEN to sample Mars's atmosphere more thoroughly than ever before." 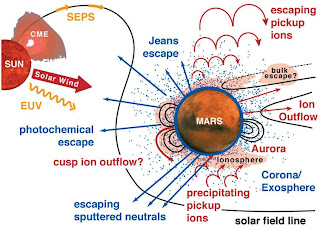 Editorial Thoughts:  A lot of science doesn't involve flashy exploration or engaging images.  MAVEN and the Lunar GRAIL missions are solid examples of the planetary missions that collect data that tell important stories only after careful analysis.  As the easy missions to many destinations are completed, these are the yeomen missions that will fill in important gaps in our understanding of processes.  [Note: A previous version of this entry mentioned a lunar GRACE mission when I meant to say GRAIL mission.  They are similar missions, but the former studies the gravity field of the Earth and the latter will do the same for the moon.]