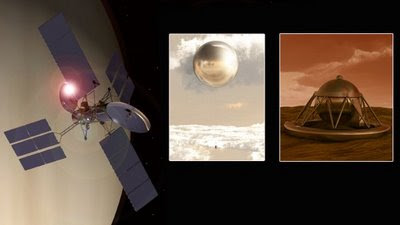 It's extremely unlikely that Congress or any reasonably near-future administration would back such a costly mission; but (unlike the design for the Europa Flagship mission) it's broken up into individually built and launched spacecraft which could also be descoped scientifically, with the separate pieces being launched as New Frontiers or perhaps even Discovery-class missions.

The mission as designed involves two Atlas 5 launches within 6 months of each other. The first is an orbiter which will radar-map Venus at two orders of magnitude better than the Magellan craft did, as well as carrying out other scientific studies and serving as a com relay for the separate craft that make up the second launch. That second launch, in turn, would be a carrier spacecraft delivering two landers and two smaller balloon spacecraft to Venus, with the landers working for 5 hours after touchdown and the balloons being blown around Venus at cloud-level altitudes (55 km) about seven times over the course of a month before their batteries fail.
This mission -- unlike previous concepts for an advanced and comprehensive Venus mission -- doesn't utilize revolutionary new electronics that could operate at Venus temperatures, or an RTG-powered refrigeration unit. Thus the short lifetimes of its landers, which cannot carry out seismic or long-term weather observations from the surface and would instead focus on analyzing surface composition. Even such a short-lived mission, however, if properly instrumented, could provide massively new scientific information on Venus, whose savage environment has up to now greatly curtailed its exploration even given the Soviet Union's long-time interest in sending surface landers to it.
One of the landers would land on the "Alpha Regio" -- one of the patches of highly fractured "tessera terrain" which are scattered around Venus and (judging from their somewhat heavier cratering) may very well be remnants of its original crust which survived the "catastrophic resurfacing" which seems to have struck the planet about 3 billion years ago and flooded most of its surface with basalt lava flows at that time. It's possible -- although far from certain -- that the tesserae are actually the surviving remnants of granite continents that formed on Venus during its earliest days when it may still have had a liquid-water ocean, which seems to be required for granite to form. Thus simply analyzing their rocky composition might confirm one of the most intriguing speculations about Venus. The other lander would touch down on a lava-flow region similar in some ways to the basalt plains that all the previous Soviet surface-analyzing landers landed on and analyzed; but it would analyze it in much greater detail -- in particular, the landers would use X-ray diffractometers and infrared spectrometers to identify actual minerals on the surface instead of just measuring total percentages of elements as the Soviets did.
Although the probe carrier spacecraft would be launched six months before the Orbiter, it would actually arrive at Venus four months later, giving the Orbiter time to set itself up in an elongated Venus orbit to perform its radio-relay duties. The probe carrier would drop two entry vehicles off at Venus, with each one inflating a 7-meter balloon on the way down that would be released along with its small instrumented gondola to bob around in the cloud level, carrying out detailed studies of the composition, cloud structure and wind patterns of Venus' atmosphere as the planet's high-speed cloud-level "superrotation" winds blow the balloons around the planet once every four days. (Again, even given the number of American, Soviet and European spacecraft dispatched to Venus, the remaining scientific mysteries about its atmosphere are numerous, and they may have some relevance to climate-change studies of Earth's atmosphere. These include measurements of the trace components in both its atmosphere and cloud droplets, as well as the question of just what drives the atmosphere's high-speed rotation around the slowly turning planet.) 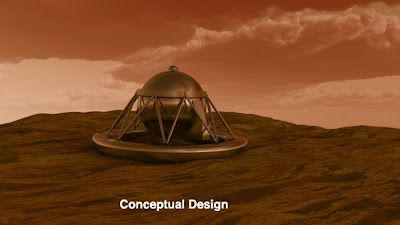 The landers would then proceed all the way down to the surface -- taking photos during the last few km of their descent -- and, after landing, they would drill up two samples of the surface each and stuff the samples through a tiny airlock into their instrumented interiors, as well as obtaining more photos and infrared spectra of the surrounding landscape during their 5-hour surface lifetimes.
After spending a month relaying the data from the balloons back to Earth, the Orbiter would aerobrake itself down (as Magellan finally did) into a low circular orbit and focus on its own scientific instruments -- including both more studies of the atmosphere (to help put the balloon measurements into context) and very detailed radar mapping with a two-antenna "interferometric synthetic-aperture radar" system using fully 2 to 3 kilowatts of power to provide images with a 50-meter resolution (and only 6 meters in some chosen areas). It would spend at least two years making these studies.
This summary doesn't list all the scientific instruments carried by each of the three types of exploratory spacecraft. Suffice it to say that -- even given the short lifetimes of the insulated landers -- the mission would be a quantum leap in the exploration of Venus. It would, however, be an expensive quantum leap. Despite the fact that it was designed not to require any revolutionary high-temperature electronics or high-powered refrigeration systems, the cost estimate runs between $2.7 and 3.8 billion -- making this a mission that Congress would be reluctant to fund any time in the reasonably near future. In my next installment, I'll examine how the Venus Flagship Mission might be chopped into separate, lower-cost pieces.

Editorial notes: I had a chance to sit in on a briefing of scientists on this proposal last December at the American Geophysical Union meeting. Bruce's summary prompted me to go back through my notes. A key element of the proposal was the simultaneous operation of the mission elements -- a highly capable orbiter for relay, simultaneous balloon and descent measurements. While the elements could be flown separately, the Venus science community clearly is hoping that their turn for a big piece of the planetary budget (after Mars and Jupiter-Europa) is coming.

A key requirement of the lander is the multi-hour lifetime that allows long integration times for the surface composition samples. This longer life is a key difference between these landers and that proposed at one time for the New Frontiers mission series. The difference in lifetimes would add $250M to the cost of the landers.

The radar imager proposed would be an extremely complex and expensive instrument. My notes list $200M, but it isn't clear whether this was just for the radar or for all the orbiter's instruments. I remember a price tag of ~$1B for the orbiter element of this mission and my notes say that the radar measurements probably cannot be done within a New Frontiers ($650M) budget.

One melancholy note: The proposal is to fly this mission in the 2020s. As was stated in the meeting (which had middle aged participants for the most part), this will be a mission for our children.