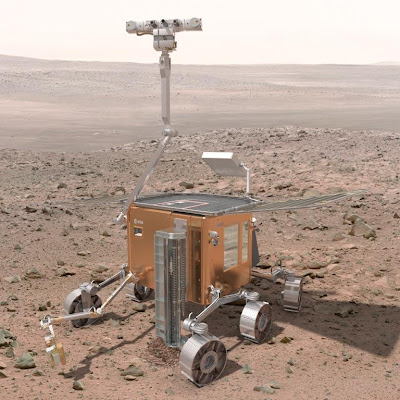 Space News has an article on possible implications of the ESA-NASA joint Mars program on ExoMars. The article focuses on the Italian Apace Agency's (ASI) reaction to the plan. Per the article, ASI was an initial backer of ExoMars when the mission's primary goal was "a technology mission that would demonstrate three key capabilities important to Europe's planetary exploration future: Entry, descent and landing technologies for the rover/lander; rover surface mobility; and the ability to drill up to 2 meters beneath the surface." As scientific capabilities of the mission have grown, the price tag has increased from 650M euros to 850M euros (with an additional 150M euros from individual nations for instruments). At today's exchange rates, that's roughly $1.4B with instruments.

Early discussions of the joint Mars program would make considerable changes to ExoMars. In 2016, an ESA orbiter with scientific instruments and a communications relay package would by launched by NASA. Two years later, an ESA rover with a NASA entry and descent system would be launched by NASA. This plan would allow NASA to keep together its entry and descent team, but at the cost of ESA not developing its own expertise in this field. Per the article, ASI is not happy with this arrangement: "ExoMars has already seen multiple delays, from a launch in 2013, to one in 2016, and now a planned launch in 2018," Saggese said, referring to a proposal produced by a NASA-ESA meeting in Plymouth, England, in late June. "And the ExoMars that is now being put together — what is it? It is not the program we subscribed to, and frankly I am not sure my national industry has much to gain from it."

Editorial Thoughts: This article highlights the issues that are likely to be common as ESA and NASA try to develop a true joint Mars exploration program. The culture and politics of the two agencies and their supporting national politics are quite different. It will take continued involvement of senior management on both sides to make it work.

I agree that any joint rover mission should use NASA's expertise in entry and descent. The Mars Reconnaissance Orbiter (MRO) and Mars Express have discovered many exciting locations to explore on Mars. Most if not all, however, are in terrain with small safe landing zones. Precision landing technology is required to safely reach those zones. NASA is investing heavily in those technologies as part of the Mars Science Laboratory. It does not make much sense to me for ESA to expend scarce resources reinventing the same wheel.

Resources:
Space News article http://www.space.com/spacenews/spacenews_summary.html#BM_3 (Note: I believe that links to this site stay active only for a week.)