The presentations from the Europa Jupiter System Instrument Mission Workshop are available. You will have to download Acrobat Reader 9 to view the presentations, but you can also hear the presenters. (If you don't want to listen, just hit pause after opening the presentations and then you can page through them.)

A couple of tidbits caught my eye. They may be old news, but this is the first time they've caught my attention:

The NASA Europa Jupiter Orbiter will carry 16GB of memory to record data during satellite flybys and observations of Jupiter. This memory does not need to be functional in Europa orbit (there's 1GB of radiation hardened memory for that). This means that substantial data could be returned from each satellite flyby.

The ESA Ganymede Jupiter Orbiter strawman instrument payload now includes a narrow angle camera. This would substantially increase the resolution of observations of Jupiter and Io (as well as increasing coverage of Europa and Ganymede). No details on the image system.

The following chart caught interested me. If budgets prevent flying a Jupiter Europa orbiter, a Jupiter orbiter conducting multiple satellite flybys would be a cheaper alternative. This chart hints at the science that could be returned (an actual flyby oriented mission would probably include more flybys of the outer moons and possibly Europa). The IPR is the Ice Penetrating Radar and LA is the Laser Altimeter. 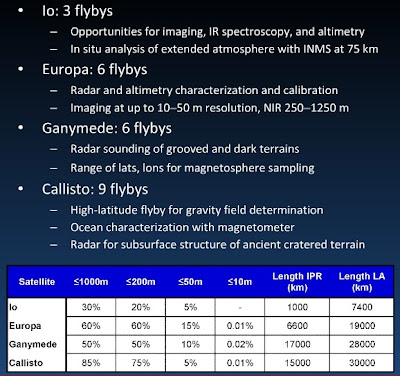 Phil Horzempa had some interesting perspectives on the presentations and mission options that I thought I'd pass on:

Some of the info is a re-hash of earlier releases. The new material mostly deals with radiation protection. The Juno Lessons Learned is very interesting, showing how that team dealt with the challenge of radiation on the Juno mission.
As I recall, one of the Congressional appropriations bills directed NASA to present a viable outline for funding the Jupiter Europa Orbiter. In addition, they directed NASA to explore the option of launching JEO in 2018. We must wait to see if that language makes into the conference bill funding NASA.
I feel that a 2018 launch for JEO would be fantastic. It allows JEO to enter Phase A next year, instead of making the JEO team mark time until early 2012 before Phase A begins. In addition, I think that the synergistic observations planned for JEO and JGO, if they are both launched in 2020, are less important to Jovian science than having serial observations. By that, I mean if JEO arrives at the Jupiter system 2 years before JGO, we will have a longer baseline of detailed observations of Jupiter. This is important for the areas of atmospheric and magnetospheric studies. In addition, having a longer baseline increases the chances that one of the Orbiters will still be alive if another major impact occurs on Jupiter.
Recall that these two Orbiters are lifetime limited. They spend about 2 years in orbit around Jupiter, before each enters orbit around their specific moon of interest, i.e., Europa and Ganymede. They will spend about 1 year in orbit around their target moon before each crashes into that moon. There may be short extensions if the Orbiters have surplus fuel.
However, there will be only minimal mission extensions possible, more on the order of months rather than years. They will not be Jovian versions of the Cassini mission which has the capability to extend its mission to a total of about 1 decade.
Therefore, instead of having 2 very capable Orbiters in Jupiter space at the same time, for a total of about 2 - 3 years, we could have those spacecraft follow each other. At about the time that the JEO would be wrapping up its mission, the JGO would be arriving in orbit around Jupiter. In this scenario, we could obtain detailed Jupiter observations for a total of 4 - 5 years.