The first week of December every year, I need to decide between attending two conferences, a forest ecology conference and the American Geophysical Union (AGU) conference.  This year, I chose the latter, which was right for my current professional work, but wrong for my advocation, future planetary exploration planning.  At AGU this year, NASA announced that it will fly a second Mars Science Laboratory (Curiosity) rover to Mars.

My conference and a deadline for getting a draft of manuscript for a paper to co-authors has left me with little time this week.  Phil Horzempa has stepped in with his account NASA's announcement.

On December 4, 2012, NASA announced that they would launch an MSL-class rover to Mars in 2020.  This decision helps to put some clarity in NASA's Mars Exploration Program after years of uncertainty.  Van has covered some of that turmoil in earlier posts.

Now that the dust has settled, we can look forward to two new exciting Mars rover missions in the coming decade: ESA's ExoMars 2018 rover and NASA's MSL-2.  Perhaps the split was unavoidable.  To constrain costs, ESA and NASA tried several options to conduct a joint rover mission.  One mission plan was to deliver two rovers (one from each agency) to the same landing site using a modified MSL-1 Skycrane.  The latest incarnation called for one, joint-effort, rover to be delivered to the surface of Mars via the Skycrane.  It seems, however, that the rover may have been more of a European creation since ESA's ExoMars rover was so far along in its development cycle.  This would have meant that JPL's rover team would have little to do for the foreseeable future.  Its expertise has been honed over a decade of Mars missions.   One can conjecture as to why NASA withdrew from cooperation with ESA for the ExoMars rover.  One possibility is that, in return for a large investment of funds, NASA was not going to be able to maintain the team of artisans at JPL who designed and built MSL-1.  They are a national asset.  So, in the end, perhaps the Mars community is better off with this split.  Instead of two rovers, or only one rover, at one site, there will now be two capable rovers exploring two separate sites on Mars.

A recurrent plea in the planetary community has been for the re-use of common spacecraft, i.e., don't keep re-inventing the wheel.  It is heartening to see that NASA seems to have accepted this idea, at least for now.  Earlier this year, NASA chose the InSight Mars geophysics mission that will re-use the Phoenix lander design.  A lot of effort went into transforming the Mars 2001 Lander into a robust, well-tested soft lander.  That system is now ready to host Discovery-class payloads.  Several ideas were presented at the Mars Concepts Workshop in June.   The Phoenix spacecraft bus is a low-cost means of getting to Mars' surface and we may see it used several times in the coming decades. 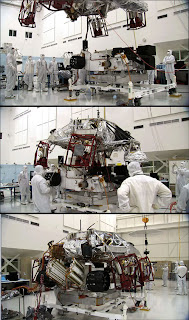 MSL-2 not only will benefit from existing designs and testing but also from a supply of flight ready spares built for MSL-1, Curiosity.

This week, NASA chose to fly what is essentially MSL-2.  NASA's chief of the unmanned Science
Directorate, John Grunsfeld, spoke about the decision at this week's AGU meeting.  Apparently, this step has been cleared by the President’s Office of Management and Budget, which approves NASA’s budget proposals

This mission will re-use the aspects of MSL-1 that took much effort to design, develop and test.  These include the large heat shield, the large parachute, the guided entry system, the Skycrane, the MMRTG, and the actuators that caused so much consternation.  Instead of being abandoned, these technologies will be used again.  Therein lies much of the logic behind the reduced cost of MSL-2.  In addition, the JPL team will get to apply lessons-learned from their effort to build MSL-1.

There has been talk of a solar option for MSL-2.  However, part of the cost savings for MSL-2 means taking advantage of the engineering that has already been done for MSL-1, including the use of an MMRTG.  If a solar option were pursued, then a lot of systems engineering would need to be re-done.  For instance, MSL-1 utilizes the heat from its RTG to warm its electronics during the bitter cold of Martian nights.   For the lowest cost and highest performance, the MMRTG is the best option.

In fact, there appear to be a number of flight-qualified spares from MSL-1, including an MMRTG, which could be used in MSL-2.  The backup MMRTG seems to have been Pu-238 fueled already.  If true, then that would provide some answer as to the availability of Pu-238 for this mission.  How that fuel would be utilized is still to be determined since there will be a good amount of radioactive decay over the next 8 years before launch.  It may need to be “mixed” with fresh Pu-238.

The subject of parts obsolescence will be addressed early on.  There are probably parts vendors that either have gone out of business, or who no longer manufacture a given part.

As to whether this mission could be moved up to 2018 with enough funding, there are other  considerations.  Mainly, 2018 is not that far away and it would be a tight squeeze trying to get the instruments built and tested by then.  A launch in 2020 actually allows a greater variety of instruments to be considered for MSL-2's payload.

The launch window in 2020 is more favorable than the 2011 window used by MSL-1.  This opens up more of the Martian surface to landing site possibilities.

A Science Definition Team will be assigned soon to define goals for the mission.  In addition, an Announcement of Opportunity for the instruments should be released this coming summer.  Caching samples for Mars Sample Return is open for debate.  Scientists could decide that resources on MSL-2 would be better utilized for in-situ studies.

Associate Administrator Grunsfeld pointed out that Mars exploration presents an opportunity for synergy between NASA's manned and unmanned flight programs.  He pointed out President Obama's challenge to fly a manned orbital mission to Mars in the 2030s.   What this means for the MSL-2 mission is anybody's guess since he did not go into detail.  However, the involvement of the agency's manned flight effort could provide some funding support.  It could also mean that some of the payload would be aimed at providing data for future manned missions to the Red Planet.  We already see this with the RAD instrument on board MSL-1.

Dr. Grunsfled mentioned that they could have flown a 2018 mission instead of the 2020 MSL-2, but, because of the budget, it would have been a down-scaled orbiter.  They decided to wait 2 years to get a surface mission.   The estimated cost of $1.5 Billion for MSL-2 includes a launch vehicle.

With reference to other aspects of NASA's unmanned Science program, he indicated that NASA will continue to try to do a Europa mission.  Costs are getting almost low enough for a new start, but they are not quite there yet.  Van has written several posts reviewing the efforts to design lower-cost Europa missions.

So, we now know the plan for NASA's Mars exploration over the coming decade.  One of the remaining questions concerns the landing site for MSL-2.  My vote is for a landing in, or near, Mariner Valley.  It would allow for spectacular views and science. 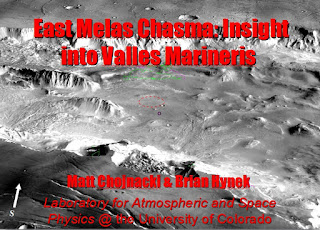