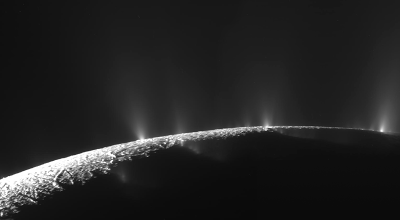 Geysers of Enceladus photographed by the Cassini spacecraft.  Credit: NASA

Last week, a proposal for a sample return from Enceladus described at the American Geophysical Union conference received fairly wide-spread coverage in the space-related press.  The descriptions generally were fairly short, however.  Here, I’ll provide additional details from a paper describing the mission that was published this past summer.

The mission, called Live Investigation for Enceladus (LIFE), would be a descendent of the Discovery Stardust mission that captured dust grains from comet Wild-2 during a flyby.  The Stardust spacecraft captured the grains in a disk of aerogel, which has exceptionally low density for a solid.  That low density preserved most of the material of the grains despite the 6.1 kilometer per second flyby.  Several key members of the Stardust team are principles in the LIFE proposal.

LIFE would replicate that method and add a second capture method to return samples from the geysers of Enceladus, Saturns E ring (believed to be formed from the material in the geysers), and the upper reaches of Titan’s atmosphere.

The appeal of the mission is that it could return samples from a potentially life-bearing subterranean ocean at Enceladus.  Like Europa’s ocean, Enceladus’ ocean appears to possess all the ingredients necessary for life: water, energy (the tidal forces that are heating the icy crust for form the ocean), and contact with rocky material that provides the elements needed for complex organic molecules.  (There are alternative explanations for the geysers that don’t require an ocean, but the evidence increasingly points to an ocean being the most likely source.)

While Europa’s ocean is sealed by kilometers of ice, Enceladus conveniently spews an estimated 150-300 kilograms of water into space every second.  The grains, though, are tiny and dispersed: Think of a particle of cigarette smoke every square meter by the time the geyser’s plume are 80 kilometers above the surface.  The small amount of material that could be analyzed by a spacecraft flying through the plume would make chemical analysis difficult for an instrument that must function within the mass, volume, and power constraints of a spacecraft.  Instruments in Earth laboratories, however, would be able to make those measurements.  The goal of LIFE is to get the ice grains to the laboratories.

Since the spacecraft would fly close to Titan and through the E ring on its way to and from Enceladus encounters, it would collect samples from those sources, too.

Capture of samples during flybys was considered by the Decadal Survey but the technical issues were considered daunting.

LIFE depends on several key elements to keep the total mission flight time to less than 14 years (compared to previous estimates of 26 years) and the costs within the Discovery budget (~$500M):


The spacecraft would also carry three instruments to conduct measurements while in the Saturn system.  A much more capable mass spectrometer than that carried by Cassini would make direct chemical measurements of the geysers, the E ring, and Titan’s upper atmosphere.  An infrared spectrometer derived from the Rosetta VIRTIS instrument would both image Titan’s surface and study the composition of its atmosphere and Encledus’ geysers.  A camera, carried primarily for optical navigation, would also image the dynamics of the geysers.   Both spectrometers would be derived from instruments developed in Europe; presumably the LIFE versions of these instruments would be paid for by their sponsoring European nations, helping to keep the mission’s costs within the Discovery budget. 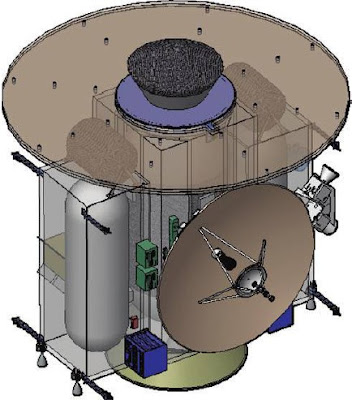 Conceptual design for the LIFE spacecraft

Editorial Thoughts: This is a sweet concept being proposed by a team that has shown that it can a deliver successful mission within the Discovery budget.

The opportunity to sample an icy moon’s ocean is unique to Enceladus and would come decades before any mission that would reach pockets of Europa’s oceans.  The instrument suite would replicate that proposed for the Journey toEnceladus and Titan (JET) mission that had the goals of imaging Titan’s surface and improving on Cassini’s measurements of the composition of Titan’s atmosphere and the geysers.  (The imaging spectrometer would make use of spectral windows in Titan’s atmosphere to improve on the coarse images possible with Cassini’s spectrometer.  However, it’s not clear whether the instrument proposed would match the resolution proposed for JET, and it’s not clear how many encounters with Titan would be done.)

The basic techniques planned for LIFE could also be used for a poor man’s comet sampling where a spacecraft would rendezvous with a comet and then repeatedly fly through its jets to collect ice and dust particles at very low velocities.

LIFE, however, faces several challenges in going from a concept to an approved mission.  First, to keep flight times short, it may have to be selected in the next Discovery competition.  Current and potential future budget cuts may delay that competition until the mission could not be built in time to launch in 2019.  (The article does not discuss fall back trajectories for reach Saturn.  They exist, but would take longer.  Each additional year of flight likely would cost another $7-10M per year in operating costs.)

Another challenge is that the mission would take close to fourteen years to return its paydust.  (Sorry, pun intended.)  Other proposed missions would return science much more quickly.  The instruments on board would provide data while the spacecraft orbits Saturn, but the article doesn’t discuss how extensive the science campaign would be.  If it were as extensive as that planned for the JET mission, then that might make up for the long flight period.

The biggest challenge facing the mission appears to be one that the paper highlights: the facilities that would house and handle the samples returned.  Because life may exist within Enceladus’ ocean, the highest level of quarantine for the samples once they reached Earth would be required.  The paper’s authors write, “the cost for planetary protection alone could exceed the cost estimate for the proposed LIFE mission.  Consequently, the impact of planetary protection costs would have a potential extinguishing effect on LIFE and other sample return missions.”

LIFE is a clever concept; I hope the authors find a way to resolve the planetary protection issue.  This concept is easily in my top two Discovery missions that I'd like to see fly.

I previously wrote about the LIFE proposal here.  You can read the paper's abstract here.