ESA Extends Its Mars Planning, But…


Buried among the major announcements from the recently concluded ministerial meeting were other decisions that may impact planetary exploration in the coming decade.  I discussed the two most prominent of these decisions relevant to planetary exploration in my last post; ESA approved the ExoMars joint implementation agreement with Russia, and decided not to proceed with a German-backed lunar lander.

Buried in the news were two other items, one positive for planetary exploration the other not.

I’ll start with the positive news.  ESA has viewed the ExoMars orbiter and rover missions as the first two missions in what would be a continuing set of missions to explore Mars.  The space agency has investigated a number of possible missions for the first half of the 2020’s.  Two missions could have been ESA’s contribution to a joint Mars sample return mission with NASA: a precision lander with a rover to fetch cached samples and/or an orbiter to collect the samples delivered to Martian orbit and bring them back to Earth.    With the delay (potentially indefinite) of NASA’s contributions to a sample return, ESA has shelved these two concepts.

Two other concepts were approved for continued study by ESA for potential launch in 2022 and/or 2024.  The Inspire geophysical network mission would deliver 3 landers to Mars with a seismometer, a weather station, heat flow probe, and possibly other instruments.  (Details have not been released, likely because the concepts appear to be in the earliest planning stages.)  This network of stations would build on the single station geophysical NASA InSight mission (2016) and the Russian geophysical station planned to accompany the ExoMars rover (2018).  If either of these stations still operates if and when the Inspire stations arrive, they would add additional nodes to the network. 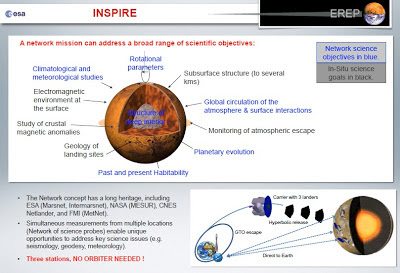 Inspire mission concept.  Click on image for a larger version.

The second mission concept would be for a Phobos sample return mission called Phootprint.  Returning a sample of Phobos, which may be accumulated rubble left from the formation of Mars or rubble blasted off the planet by asteroid strikes, is a worthy scientific goal in its own right.  Russia attempted a similar mission, and American scientists have proposed their own equivalent missions several times for the Discovery program.  In addition to the scientific goals, the mission would also develop much of the hardware needed for the eventual Mars sample return orbiter. 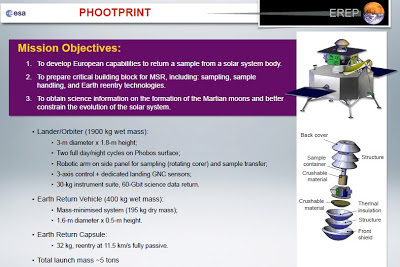 Phootprint mission concept.  Click on image for a larger version.
The decision at the Ministerial mission was to proceed with mission studies to better define the concepts and prepare them to enter development.  At the next Ministerial meeting planned for 2015, ESA’s managers plan to seek approval to begin development on one or both of the missions.

The less positive news for ESA’s science program was that the ministers decided to freeze its budget for the next several years (after a small bump from the contributions of two new ESA members).  Inflation will rob the science program of its purchasing power each year at a projected rate of 2-3% per year.  One news article quoted and ESA science manager as saying that among the options may be to delay to cancel a mission.  Typically, agencies push budget cuts onto the missions least far along in selection or development.  If ESA does this, then either its next medium mission selection may be delayed or the JUICE Jupiter-Ganymede mission may be pushed out.

You can download the presentation where I found the slides above from here.