Phil  Horzempa returns with another post, this one on an interesting idea for a first joint human-robotic mission to the far side of the moon.

I've just finished a revision to a paper, so I will have more time to post in the near future.

The Moonrise robotic sample return mission has been proposed several times as a New Frontiers effort.  Van discussed some of the aspects of the mission in previous posts. Recently, the Moonrise team has released more details of how the mission would be conducted.  I will first review those aspects, before considering a new twist to this mission involving possible participation by NASA's manned spaceflight program. 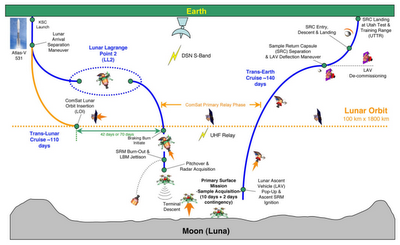 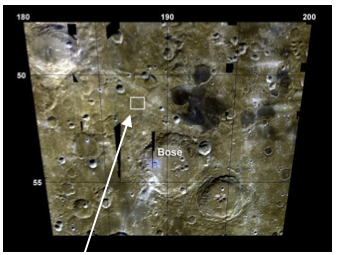 The Barcelona report (1) is the first detailed public disclosure of Moonrise's mission and spacecraft design.   Figure 1 shows the outline of the mission operations.  Since Moonrise is designed to return samples from the Far Side of the Moon, it requires a relay element which is provided by a mini-comsat.  Note that both the lander and the relay go through the Lunar L2 location on the way to their target.  This is perhaps to save fuel and to "wring-out" the craft before the events surrounding sample acquisition.  The Moonrise team has picked a landing site near the Bose crater within the South Pole - Aitken Basin on the Far Side. (Figure 2) 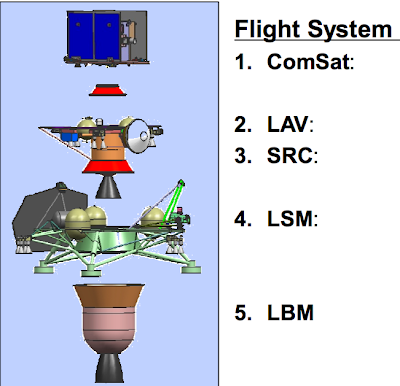 Figure 3 shows the entire launch package.  Note the large SRM (Solid Rocket Motor) required to cancel most of the lander's velocity as it descends from LL2 to the Moon's surface.  It appears that the Moonrise lander and its descent sequence are very similar to that of the Surveyor landers of the 1960's.   After retro-fire is complete, the large SRM is ejected, with final approach, and velocity cancellation, handled by vernier thrusters. 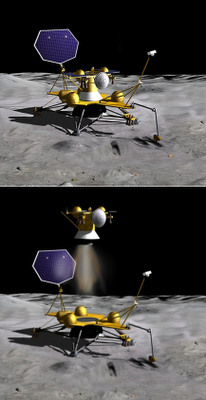 The lander spends 10 days on the lunar surface, utilizing a scoop to gather samples.  There is a sieve on the scoop so that a larger number of small rocks are collected.  The lander is solar-powered, requiring that the surface mission be accomplished within the 2-week-long lunar day.  With the completion of sample acquisition, the LAV (Lunar Ascent Vehicle) is launched. (Figure 4)  The Earth-return capsule may go through the LL2 on its journey, again perhaps to save fuel.

The Moonrise proposal was down-selected as a finalist in the last 2 New Frontiers competitions, but was not chosen to proceed to flight.  It seems likely that it will again be put forward for the next NF AO (Announcement of Opportunity).  However, recently, a new approach to collecting samples from the Moon's Far Side has been proposed.

With the arrival of the Orion manned exploration capsule in a few years, it is possible that it could join an unmanned Moonrise mission to collect lunar samples.  In this new approach, the Orion would fly to the Lunar L2 location and "hover" there for 1 - 6 months.  The astronaut crew would not land on the Moon, but would tele-operate an unmanned rover on the Moon's Farside.  It seems that details have not been fleshed-out, but let me suggest one scenario.  A Moonrise lander could be dispatched to a landing on the Farside, delivering the tele-operated rover.  If the Moonrise mission were flown in conjunction with a manned Orion mission, then the relay comsat and Earth-return capsule could be deleted from the Moonrise payload, freeing up mass needed to accommodate the  rover.   This surface mission would still need to be completed within 10 days because of thermal and solar-power restrictions.  However, the tele-presence of humans would greatly assist the collection of samples.  One could imagine a long-term surface mission lasting several months, but that would call for a lander modified for the 2-week-long ultra-cold lunar nights. 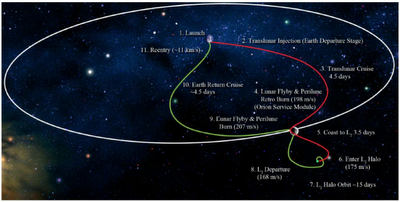 Just recently, at the 5th Lunar Science Forum, Jack Burns spoke about an Orion mission to the Lunar L2 location (2).  A diagram of such a mission, from an earlier proposal by Burns, is shown in Figure 5.  At the Lunar Science Forum, he presented a modified version of this mission that would see the Orion crew "settling in" at the LL2 location for about 90 days, instead of the 15 days indicated in Fig. 5.  In addition, Burns hinted that such a manned mission could include the task of collecting lunar samples delivered to the LL2 location by a Moonrise-type vehicle.  He pointed out that this mission would return to Earth with lunar samples without needing to actually land a crew on the surface.  Once the sample collection phase of the Moonrise mission was complete, the rover would still remain on the Moon's surface, available to pursue more exploration, guided by the Orion crew at LL2.

This hypothetical mission between NASA's Science Mission Directorate and Human Space Flight, could serve as a dry-run for a similar joint sample-collection effort at Mars, as described in my post of July 5, 2012.  The Martian mission would see an astronaut crew collecting samples launched into orbit around Mars by unmanned precursors.  As with the L2-Farside mission, that crew could also tele-operate a rover to gather additional samples.  The L2-Farside mission could serve as a valuable precursor for such a Mars mission.  To quote from a Lockheed-Martin document (3), "The lunar L2-Farside missions will develop and practice operational methods for this type of human/robot exploration."  So, as NASA pushes towards developing the experience base required for a manned Mars mission, we may see valuable lunar science data obtained along the way.

1.  "MOONRISE: SampleReturn from the South Pole - Aitken Basin" by Jolliff et al
2.  "The FirstHuman-Robotic Mission to the Lunar Farside using the Orion MPCV at Earth-MoonL2 and a Teleoperated Rover" by Jack Burns
3.  "Early Human L-2Farside Missions" by Lockheed-Martin Corporation