Caught in a Squeeze

A two-per-decade cadence of Discovery missions is not what was originally planned for the program. The program was envisioned as a frequent series of relatively inexpensive missions that allowed an  element of risk not possible in more expensive missions.  As the first figure below shows, the early missions fulfilled that goal with a rapid clip of missions costing less than $340M.  Over time, however, the complexity of missions has increased with commensurate increase in mission costs (see the second figure).   Given tight budgets, the result has been to spread out the selection of new missions with, as mentioned above, five years between the selection of the GRAIL mission launched last year and the previous mission. 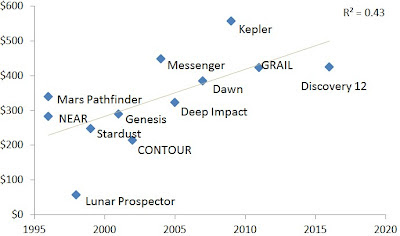 Discovery mission costs by year of launch.
The Discovery 12 mission will be the one selected this summer.
Data from the Nature article based on data from the Aerospace Corporation. 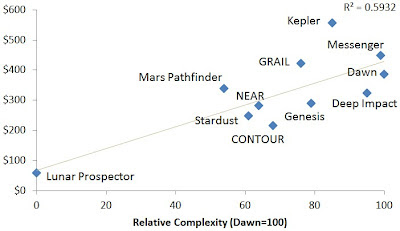 Discovery mission cost relative to mission complexity.
Data from the Nature article based on data from the Aerospace Corporation.

Last year’s planetary Decadal Survey recognized both the problem of too few missions and the increasing complexity of missions.  It recommended that the frequency of missions be increased to five per decade and the cost cap be increased to $500M per mission (from $425M for the mission to be selected this summer).  This year’s fiscal year 2013 budget proposal, however, proposes cutting the overall budget for NASA’s planetary with reductions to the Discovery and New Frontiers missions in the out years to refund the Mars program.  (See this post on the proposed budget.  Current budget plans provide full funding for the recently selected New Frontiers OSIRIS-REx asteroid sample return mission and the Discovery mission to be selected this summer.  Budgets for these programs are then reduced as funding for Mars missions increases, impacting the pace of future mission selection.)

Along with the description of the current candidate missions, Nature also discusses its assessment of the implications of rising mission complexity and costs:  “The growing lag — and the escalating costs and complexity that have caused it — is having a deleterious effect on the programme, some NASA observers say, because it creates an increasingly risk-averse approach to mission selection...  All of this is why Gregg Vane, the programme manager for mission formulation at NASA’s Jet Propulsion Laboratory in Pasadena, California, says that Discovery has strayed from its original intended purpose, which was to be a riskier counterpoint to the too-big-to-fail flagships. Failure is no longer an option for a Discovery mission either, he says. ‘The tolerance for risk is significantly lower than it has been in the past.’”  NASA disputes this assessment: "Jim Green, director of NASA’s planetary-science division, flatly denies this charge. 'What is it about those [missions] that you think is averting risk?” he asked. “You can’t tell me that the missions we’ve executed in Discovery are not pushing the envelope.'"

Editorial Thoughts: NASA’s managers seemed trapped between a rock, the easy low complexity compelling planetary missions have been done, and a hard place, tightening budgets.  Whichever of the three current candidate missions is selected, it will provide compelling science.  I presume that the next set of candidate missions will be equally compelling.  Within its constraints, NASA’s managers are finding exciting missions.  (I have no way to assess whether or not, as Nature claims, the program is becoming more risk adverse.)

Any relief from this situation will have to come from the political process.  Adding an average of $75M per year to the Discovery program should allow a third mission per decade.  (The costs quoted above are for the Principle Investigator costs; NASA has additional costs on top of the PI costs such as launch costs and management costs.  I’ve never seen a full accounting of Discovery mission costs, but my back of the envelope calculations suggest $750M may be right.)  The House of Representative’s proposed FY13 budget would increase next year’s budget for the Discovery and New Frontiers programs by$115M.  (The Senate’s proposed budget would not increase either budget.)  While the Nature article discusses the problems of the Discovery program (budget cap currently at $425M) the New Frontiers program (budget cap currently at ~$800M) seems to face similar problems.

The Discovery program has been a phenomenal success.  I believe it deserves additional funding to increase the pace of missions in the coming decade.