The European Space Agency (ESA) is moving to approve its first lunar landing mission.  While the mission will carry out some science, the primary goals of the mission will be to fully develop and demonstrate autonomous landing in the rugged terrain near the moon’s south pole. 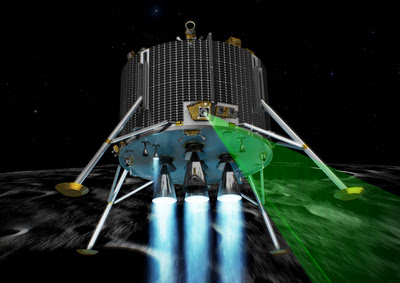 The lander will use only its autopilot while descending over rough terrain.  The craft’s computer will compare images it takes and it descends along with terrain maps generated with LiDAR to maps stored in its memory.  By recognizing landmarks, the lander’s computers will adjust direction and descent speed to safely descend toward an preselected landing area.  The final landing location will be selected by the craft itself to avoid boulders, steep slopes, and shadows that would prevent its solar panels from generating power. 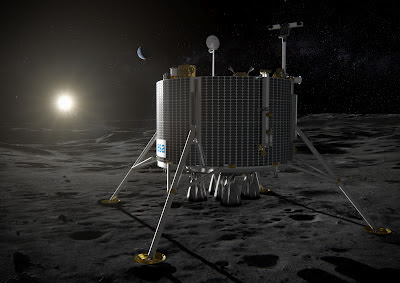 Once on the surface, the lander will become a science station.  While previous lunar landers have stayed near the lunar tropics (all landed within 40 degrees of the equator), this mission will explore a new region and possibly new soil types.  The landing zone will be at the edge of the largest impact basin in the Solar System, the Aitken Basin.  Mission planners hope that the instruments will sample soils and rocks thrown up from the lower lunar crust and mantle.  Another set of instruments will explore the interaction of the plasma environment at the lunar surface with the omnipresent lunar dust.

Planning documents talk about a nominal surface mission of 14 days following landing in the sunlight when the primary science will be conducted.  That will be followed by 14 days of night in which the lander will use its batteries to keep essential systems from failing in the chill.  Mission planners plan to reacquired communications with the lander with sunrise, and the mission could potentially last for a number of months.

Approval of the mission is expected this fall by ESA.  Landing is planned for 2018.

Editorial Thoughts:  In many respects, this mission has similar goals to NASA’s Mars Pathfinder mission that landed in 1997.    The Pathfinder mission allowed NASA to prove the technology for landing smaller than flagship-scale missions on Mars.  The entry, descent, and landing technologies developed for that mission directly enabled the landing of the Mars Exploration Rovers Spirit and Opportunity in 2004.  Several teams are proposing future rover missions that would land on Mars using Pathfinder’s airbag technologies.  (NASA later developed a second Mars EDL system for small stationary landers for the Phoenix mission that may serve as the platform for the InSight mission currently in competition for selection as the next Discovery mission.)

ESA’s ExoMars was initially conceived as a technology development and demonstration mission, although it has become primarily a science mission as its definition firmed.  Aspects of the original goal remain with a demonstration lander in 2016 that will prove a landing system for future Mars missions.

I believe that the pictures taken by the lander may prove to be some of the most iconic of the space age.  The Earth will lie close to the horizon,  ensuring that images will capture the mountainous landscape of the lunar southern polar region with the Earth hovering just above.  We may again see our world as a fragile oasis and as part of a double planet system.