Private Enterprise to Explore and Exploit the Solar System? 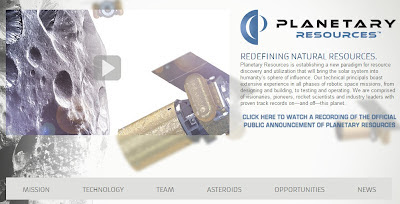 The Planetary Resources website.  I recommend watching the videos.

By now, you have probably read about the plans – perhaps ‘ideas’ might would be a better word at this point – of the Planetary Resources company to mine near Earth asteroids.  Backed by several billionaires, the company has deep financial resources and has hired engineers and managers experienced in planetary exploration.

In many ways, the ideas of Planetary Resources managers echo those of the companies formed to find riches in the early era of European expansion.  Private enterprise financed by the wealthy formed the British East India Company and the Virginia Company that backed the Jamestown colony.  Like the financers of Planetary Resources, they used their existing fortunes to build on technology and exploration financed initially by governments.  (See, for example, Prince Henry the Navigator and the voyages of Vasco da Gama and Columbus.)

Various news outlets have good accounts of the company’s long term plans to find mineral rich near Earth asteroids and mine their resources.  To very briefly summarize their plans, they will first mine the volatiles like water that are essential for extending manned exploration and exploitation of the solar system beyond low Earth orbit.  Then the company will move to mining rare and expensive minerals such as platinum that are essential to high technology products.   I don’t have any particular expertise in mining, especially on remote, airless orbs, and I recommend their articles for analysis of the long term economic possibilities and risks.  Also, I’ve seen no details on how Planetary Resources plans to actually conduct asteroid mining and return materials, and in the absence of information, all commentary would have to be based on speculation.  (For more information, see: Wired Science, New York Times, and Space News.)

Here, I’d like to report on the company’s shorter term plans to develop and launch three classes of spacecraft both as means of gaining immediate revenue and furthering their long term goals.  The company plans to build and lease or sell use of three classes of unmanned spacecraft:

The managers at Planetary Resources have released no details that I've found on the specific capabilities and technologies of their unmanned spacecraft.  Their website simply says, “While much of Planetary Resources’ technology is proprietary, our technological approach is driven by a few simple principles to enable innovation in cost. We are incorporating recent innovations in commercial microelectronics, medical devices, and information technology, in ways not traditionally used by robotic spacecraft.”

The website and media accounts do not discuss whether Planetary Resources will make the data from its spacecraft available to the scientific community.   Its managers may decide, as oil companies do with their geological surveys, that such information is proprietary.  Or not.

Editorial Thoughts: We are now into the sixth decade of the space era.  The knowledge and tools to design, test, and build spacecraft have progressed to the point where new private companies can design capable spacecraft.  By new, I mean companies that aren’t part of the traditional government-aerospace industry network that have jointly designed and flown spacecraft since the earliest launches.  Rather I mean companies like Orbital Sciences and Space X that have designed launch vehicles, satellites, and are now working on manned spacecraft.  I find it credible that Planetary Resources could muster the resources to design and fly their unmanned spacecraft and may introduce some clever new ideas.  By using new approaches, keeping their spacecraft tiny and their instrument compliments small, and accepting higher risks of failure, they may do so much more cheaply than the traditional government space agencies and their established industrial partners.

What is less certain is whether or not there will be sufficient numbers of non-government customers to make the unmanned spacecraft a viable business that doesn’t ultimately depend on taxpayer support.  Nor is it clear that governments will want to spend significant funds to support the short and intermediate term scientific capabilities that Planetary Resources has proposed.  Ideas to flyby and orbit near Earth asteroids for scientific research have been proposed many times.  However, the scientific goals for near Earth asteroid missions have progressed beyond simple rendezvous and remote sensing to returning samples of these asteroids to Earth.  Both Japan and the United States have approved sample return missions in development (the second such mission for Japan), and the Europeans are considering a sample return mission.  To be fair, it’s not possible to determine from the information that Planetary Resources has released how much they are depending on selling their services versus funding them through their investors.

If I were to bet, I think that the financial backers of Planetary Resources will choose to make the data they collect on near Earth asteroids publicly available.  The time frame for making a substantial profit is long, and the financiers may be more interested in enabling human expansion into the solar system rather than achieving greater wealth for themselves.

On the long term goal of asteroid mining, it is exciting, but I am skeptical about success in the next few decades.  Much technology and experience has to be gained and financed.  The availability of volatiles mined from asteroids depends on an active space program reaching beyond low Earth orbit.  More efficient use and reuse of rare metals on Earth offers another alternative to dealing with shortages.  In the end, it hard to tell when and who will ultimately make the idea successful.  Great wealth did come from opening up trade routes between Europe and Asia and taking over the resources of the Americas.  However, the companies that initially financed these ventures had a poor record of success.  Look up the reason that Scotland had to give up its independence and become a partner in a new United Kingdom with England.