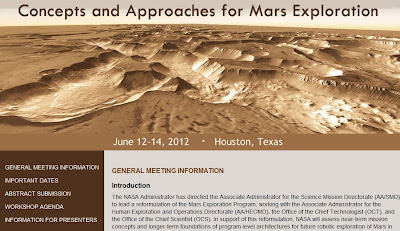 You may have read by now that this past Friday, NASA held a press conference to discuss its planning process to develop a new strategy to explore Mars.  This follows the budget cuts to NASA’s Mars exploration plans requested in the President’s Fiscal Year 2013 budget.  NASA has announced in response to those cuts that it would plan for a modest $700M Mars mission in 2018 and future missions that would both further both Mars science and develop technologies for eventual manned missions to Mars.  No details other than the budget have been released for the 2018 mission.  You can read NASA’s press release on the conference here.

This was an unusual press conference that presented the plan for the plan but carefully did not discuss any of the ideas under consideration for specific missions, especially the planned 2018 mission.  What NASA managers did was to reiterate NASA’s plans to develop a new plan and to announce a workshop to be held this June to solicit ideas that “will provide an open forum for presentation, discussion and consideration of concepts, options, capabilities and innovations to advance Mars exploration. These ideas will inform a strategy for exploration within available resources, beginning as early as 2018 and stretching into the next decade and beyond.”

You can look at the list of topics planned for the workshop at this website, which include:

Instrumentation and Investigation Approaches (for example, “Interrogating the shallow subsurface of Mars, both from orbit (remote sensing, active, or passive) and from the surface (e.g., sounding, drilling, excavating, penetrators, or other approaches)”

Safe and Accurate Landing Capabilities, Mars Ascent, and Innovative Exploration Approaches (for example, “Concepts to navigate and control entry and landing systems to improve landing accuracy from the current state of the art (~10-km semi-major axis or “miss distance”) to ≤1 km or lower (<100 m).)”

The focus of the workshop is on ideas for developing a technology roadmap, not for laying out specific options for the 2018 mission or for identifying scientific priorities, which will be taken from the recently completed Decadal Survey.

The ideas presented at the workshop will be used by a NASA taskforce, the Mars Program Planning Group (MPPG) headed by Orlando Figueroa, which will recommend a new Mars strategy and the goals of the 2018 mission in a report to be delivered this August.

Editorial Thoughts: The list of topics for the workshop seems to emphasize the importance of the new Mars program in developing technologies to further robotic exploration of Mars and to eventually enable manned exploration.  The science goals for the missions will be taken from last year’s Decadal Survey report, which emphasized that other than missions leading to an eventual Mars sample return, no Mars science was a higher priority than science for other bodies in the solar system.  (The report’s authors did make an exception by explicitly including Mars within the list of candidate targets for the low cost Discovery program.)

It will be interesting to see how NASA will reconcile a Mars program that does not include sample return with the goals of the Decadal Survey.  Two other analyses of this press conference suggest that the task may be difficult.  Lou Friedman wrote at the Planetary Society website that, “One of the big concerns now in the science community is how the new program plans will meet Planetary Decadal recommendations.”  Marcia Smith at Space Policy Online.com wrote, “Convincing the planetary science community and its supporters that another Mars mission is more important than other planetary exploration missions waiting their turn may be a challenging task, and whether it advances President Obama's goals for human exploration beyond low Earth orbit -- which starts with a human mission to an asteroid, not to Mars -- is an open question.”

I believe that NASA’s managers are doing their best to respond to a bad situation not of their making (the proposed budget cuts) by creatively merging the goals and available funding of the human spaceflight programs.  The comments quoted above indicate some of the challenges they face.  The scientific community will present its collective response to the eventual plan through its scientific societies and NASA’s advisory and analysis groups.  The ultimate practical measure of how well NASA succeeds may be whether Congress, ends up supporting this new direction in the ultimate budget approved for FY13 and whether the President proposes the necessary funding to move forward in his FY14 budget.