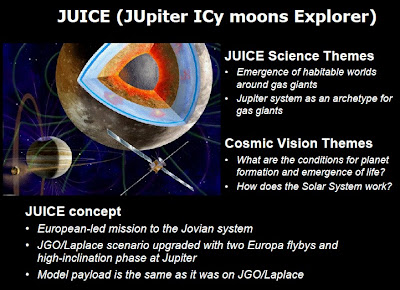 Jonathan Amos at the BBC website reports that the JUICE Jupiter system mission is now the front runner for the European Space Agency's selection of its next large science mission.  If the recommendation by the Space Science Advisory Committee is ratified in a few weeks by the Space Programme Committee, JUICE would launch in 2022 and arrive at Jupiter in 2030.  The spacecraft then would study the giant planet and its magnetosphere as well as conduct flybys of the moons Europa and Callisto before entering orbit around Ganymede for extensive studies of that moon.  Click on the image above (or here) to read the most recent summary of the mission from the proposal team, or you can read a summary of the mission goals in an earlier post of mine, JUICE – Jupiter Ganymede Orbiter Revised Proposal.  There is the possibility that NASA may play a minor role in the mission such as contributing an instrument or two.


On the other side of the Atlantic, the U.S. Senate's Commerce-Justice-Science subcommittee voted to restore $100M of the proposed cuts to NASA's Mars program.  This would still leave NASA's planetary science program with a cut compared to last year of approximately $200M.  It's unclear how NASA would use the additional funding if it is matched in the House budget and eventually signed into law by the President.  The additional funds would be too late and too small to allow NASA to rejoin the European and Russian 2016 mission and probably the 2018 mission.  Possibilities I can think of is that NASA might contribute entry, landing, and descent technology for the 2018 rover in exchange to being allowed to contribute instruments, or the funding to enhance the scope of NASA's own planned 2018 Mars mission, or the funding might be used to enable more frequent flights of Discovery or New Frontiers missions.


I'll close by posting two slides from the recent JUICE mission summary that describe the contributions the mission would make to studying Ganymede and Europa.  I recommend you read the full presentation.


I am excited by this news!  JUICE would be a fantastic mission. 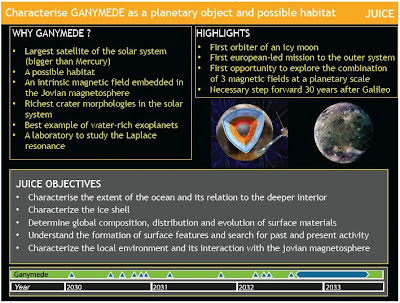 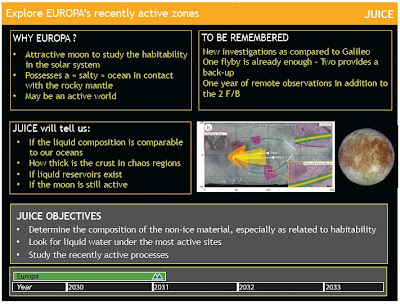