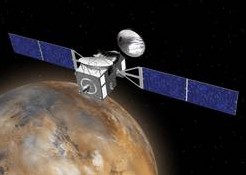 2016 Trace Gas Orbiter releasing the demonstration lander
Space New reports that ESA has cleared funding to continue work on the 2016 joint Mars mission with NASA.  In that mission, ESA will provide the orbiter and a demonstration lander, while NASA will provide the launch and fund the instruments.  ESA's budgetary rules had required it to issue a stop work order and seek approval for a new program following changes in NASA's ability to fund the joint 2016 and 2018 missions, which were a single program within ESA.

It appears that this approval also covers the joint 2018 rover mission, although the article is not totally clear on that point.  The rover mission is still in the early re-definition phase following the Decadal Survey recommendation that NASA's contribution to the mission be capped.  That meant that the previous plan where each agency would supply its own orbiter was no longer feasible.

See this post for a description of the Trace Gas Orbiter instruments.