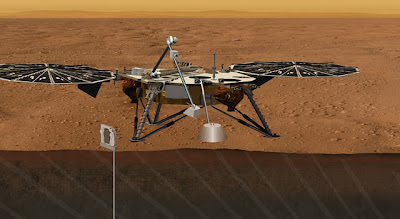 NASA today announced the three selected candidates for the next Discovery mission selection, including a Mars geophysical station, a Titan lake probe, and a comet multiple lander mission.  Early versions or related concepts for these proposals were described in previous posts, and I have provided links to those posts.  It is likely that the concepts for these missions have matured and changed since the posts describing them.

NASA also announced funding for three mission concepts to mature their designs for possible selection in the future.


Editorial note: These all sound like excellent missions, and any would add significantly to our knowledge of the solar system.  I am encouraged that the list includes an outer planets proposal, giving  hope that the Discovery program can be used to fly missions to these distant worlds.

WASHINGTON -- NASA has selected three science investigations from which it will pick one potential 2016 mission to look at Mars' interior for the first time; study an extraterrestrial sea on one of Saturn's moons; or study in unprecedented detail the surface of a comet's nucleus.


Each investigation team will receive $3 million to conduct its mission's concept phase or preliminary design studies and analyses. After another detailed review in 2012 of the concept studies, NASA will select one to continue development efforts leading up to launch. The selected mission will be cost-capped at $425 million, not including launch vehicle funding.


NASA's Discovery Program requested proposals for spaceflight investigations in June 2010. A panel of NASA and other scientists and engineers reviewed 28 submissions. The selected investigations could reveal much about the formation of our solar system and its dynamic processes. Three technology developments for possible future planetary missions also were selected.


"NASA continues to do extraordinary science that is re-writing textbooks," said NASA Administrator Charles Bolden. "Missions like these hold great promise to vastly increase our knowledge, extend our reach into the solar system and inspire future generations of explorers."
The planetary missions selected to pursue preliminary design studies are:


"This is high science return at a price that’s right," said Jim Green, director of NASA’s Planetary Science Division in Washington. "The selected studies clearly demonstrate a new era with missions that all touch their targets to perform unique and exciting science."


The three selected technology development proposals will expand the ability to catalog near-Earth objects, or NEOs; enhance the capability to determine the composition of comet ices; and validate a new method to reveal the population of objects in the poorly understood, far-distant part of our solar system. During the next several years, selected teams will receive funding that is determined through contract negotiations to bring their respective technologies to a higher level of readiness. To be considered for flight, teams must demonstrate progress in a future mission proposal competition.


The proposals selected for technology development are: