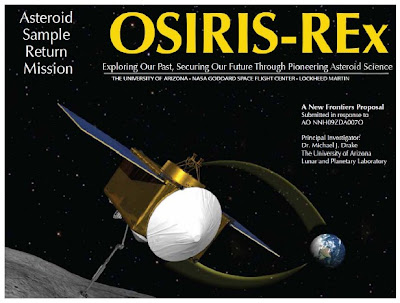 NASA announced the selection of the OSIRIS-REx near-Earth asteroid sample return for the next New Frontiers mission, beating out a Venus lander and a lunar sample return mission.  Bruce Moomaw wrote about the OSIRIS-REx mission for this blog, and his description can be found here.  There are also articles at Space News and at the Planetary Society's blog site.  NASA press release site also includes a video (which I can't watch with my current slow internet while I'm traveling): http://www.nasa.gov/topics/solarsystem/features/osiris-rex.html

The press release itself is copied below.  And congratulations to the winning team which submitted versions of this mission at least twice and I think perhaps three times.

NASA TO LAUNCH NEW SCIENCE MISSION TO ASTEROID IN 2016

WASHINGTON -- NASA will launch a spacecraft to an asteroid in 2016 and
use a robotic arm to pluck samples that could better explain our
solar system's formation and how life began. The mission, called
Origins-Spectral Interpretation-Resource
Identification-Security-Regolith Explorer, or OSIRIS-REx, will be the
first U.S. mission to carry samples from an asteroid back to Earth.

"This is a critical step in meeting the objectives outlined by
President Obama to extend our reach beyond low-Earth orbit and
explore into deep space," said NASA Administrator Charlie Bolden.
"It's robotic missions like these that will pave the way for future
human space missions to an asteroid and other deep space
destinations."

NASA selected OSIRIS-REx after reviewing three concept study reports
for new scientific missions, which also included a sample return
mission from the far side of the moon and a mission to the surface of
Venus.

Asteroids are leftovers formed from the cloud of gas and dust -- the
solar nebula -- that collapsed to form our sun and the planets about
4.5 billion years ago. As such, they contain the original material
from the solar nebula, which can tell us about the conditions of our
solar system's birth.

After traveling four years, OSIRIS-REx will approach the primitive,
near Earth asteroid designated 1999 RQ36 in 2020. Once within three
miles of the asteroid, the spacecraft will begin six months of
comprehensive surface mapping. The science team then will pick a
location from where the spacecraft's arm will take a sample. The
spacecraft gradually will move closer to the site, and the arm will
extend to collect more than two ounces of material for return to
Earth in 2023. The mission, excluding the launch vehicle, is expected
to cost approximately $800 million.

The sample will be stored in a capsule that will land at Utah's Test
and Training Range in 2023. The capsule's design will be similar to
that used by NASA's Stardust spacecraft, which returned the world's
first comet particles from comet Wild 2 in 2006. The OSIRIS-REx
sample capsule will be taken to NASA's Johnson Space Center in
Houston. The material will be removed and delivered to a dedicated
research facility following stringent planetary protection protocol.
Precise analysis will be performed that cannot be duplicated by
spacecraft-based instruments.

RQ36 is approximately 1,900 feet in diameter or roughly the size of
five football fields. The asteroid, little altered over time, is
likely to represent a snapshot of our solar system's infancy. The
asteroid also is likely rich in carbon, a key element in the organic
molecules necessary for life. Organic molecules have been found in
meteorite and comet samples, indicating some of life's ingredients
can be created in space. Scientists want to see if they also are
present on RQ36.

"This asteroid is a time capsule from the birth of our solar system
and ushers in a new era of planetary exploration," said Jim Green,
director, NASA's Planetary Science Division in Washington. "The
knowledge from the mission also will help us to develop methods to
better track the orbits of asteroids."

The mission will accurately measure the "Yarkovsky effect" for the
first time. The effect is a small push caused by the sun on an
asteroid, as it absorbs sunlight and re-emits that energy as heat.
The small push adds up over time, but it is uneven due to an
asteroid's shape, wobble, surface composition and rotation. For
scientists to predict an Earth-approaching asteroid's path, they must
understand how the effect will change its orbit. OSIRIS-REx will help
refine RQ36's orbit to ascertain its trajectory and devise future
strategies to mitigate possible Earth impacts from celestial objects.

Michael Drake of the University of Arizona in Tucson is the mission's
principal investigator. NASA's Goddard Space Flight Center in
Greenbelt, Md., will provide overall mission management, systems
engineering, and safety and mission assurance. Lockheed Martin Space
Systems in Denver will build the spacecraft. The OSIRIS-REx payload
includes instruments from the University of Arizona, Goddard, Arizona
State University in Tempe and the Canadian Space Agency. NASA's Ames
Research Center at Moffett Field, Calif., the Langley Research Center
in Hampton Va., and the Jet Propulsion Laboratory in Pasadena,
Calif., also are involved. The science team is composed of numerous
researchers from universities, private and government agencies.

This is the third mission in NASA's New Frontiers Program. The first,
New Horizons, was launched in 2006. It will fly by the Pluto-Charon
system in July 2015, then target another Kuiper Belt object for
study. The second mission, Juno, will launch in August to become the
first spacecraft to orbit Jupiter from pole to pole and study the
giant planet's atmosphere and interior. NASA's Marshall Space Flight
Center in Huntsville, Ala., manages New Frontiers for the agency's
Science Mission Directorate in Washington.