With the release of the Decadal Survey just 48 hours away, I thought that I would report on the list of missions that you, the readers, selected in your poll on the website.  Since you are the reason for this blog, I wanted the last post before the release of the Survey to be your opinions.

Missions were listed by cost categories: Larger Flagship (>$2B), smaller Flagship (~$1.4-2B), and New Frontiers (~$1B).  Costs were taken from the mission concept reports.  Where multiple options for a concept resulted in a range of costs, I selected the version that seemed to best represent the spirit of the concept.  Not entirely scientific, but this seemed the best that the simple Blogspot poll tools would allow.

Within each cost category, two mission concepts were clear favorites, gathering 68% or more of the votes between them: 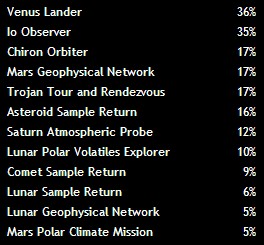 The strong polling for the Uranus orbiter and the Neptune mission suggests that you like the idea of revisiting to distant worlds only briefly visited once.  The strong interest in the Jupiter Europa Orbiter, the Titan Lake Lander, and Io observer indicated a desire to also go to the next level of exploration for three moons that have already received a lot of attention.  This wasn't a blanket choice for outer planet moons; Ganymede and Enceladus missions did not poll well.

I was surprised that Mars did not fare better given the strong popularity of the MER rovers.  Perhaps this was a reaction against starting down the road towards an eventual and expensive Mars sample return.

We will know if two days if the Decadal Survey shares these opinions.