One key to understanding the recommended program is that the Survey's members sought balance.  While Mars has dominated NASA's program for over 15 years, the goal going forward was to have a balanced program.  There are a couple of ways to look at balance.  One is by type of target -- inner planet other than Mars, outer planets, primitive bodies, etc.  Another way is by the method of study: remote sensing of surfaces or atmosphere, measurements within an atmosphere, measurements on the surface, measurements within a magnetosphere, sample return.  The latter approach is often more telling than the destination.  An atmospheric chemist, for example, can switch between Venus, Titan, or Uranus, but is left out on a lunar mission.

With that in mind, how do the recommended missions compare by target and type of study? 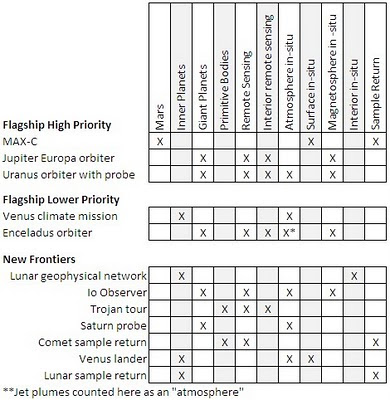 Among the Flagship missions, the Giant Planets were a clear favored destination.  This isn't surprising.  Mounting missions to these distant worlds in inherently expensive and once that initial cost is assumed, the inclination is to fly more capable missions that require Flagship (>~$2B) funding.  Among the New Frontiers candidates, however, there are no clear winners.  Candidate missions are well distributed by type of destination and by type of study.  I believe that the goal of achieving this balance explains why a near Earth asteroid sample return mission was dropped from the list (although it remains a candidate for the selection in progress).  Including it would have meant too many primitive body missions and too many sample return missions.

(I want to emphasize that the chart above has been simplified to focus on major types of study.  The Venus Climate Mission, for example, would include a camera on the orbiter for context images, but this would not a major focus of the mission.  On the other hand, the Comet Sample Return mission has to have capable remote sensing instruments to select landing sites and would make a major contribution to our understanding of the surface of these bodies even though the focus of the mission would be on the sample return.  I also chose to count the Enceladus orbiter as making an "atmospheric" measurement within that moon's plumes, but counted measurements of the near-vacuum atmospheres of Europa and Io as magnetosphere studies.  Please forgive any oversights.)

It's also interesting to look at the program in terms of financial balance.  The Survey members stated that they did not want a single mission to dominate the program.  Here is a list of the estimated mission costs in the Survey report with acceptable costs in parentheses if the full cost was unacceptable:

(Cost estimates were not given for the Venus lander and lunar sample return missions; since both have proposals in competition for the next selection, it was assumed their costs would fall within the present New Frontiers cost cap.)

From this list, it appears that Flagship missions around ~$2.5B were acceptable because they would each represent less than a quarter of the then presumed funding for new missions.  (Under the new funding outlook, none can be afforded except for a possible even more descoped joint rover mission with ESA.)

Interestingly, the additional New Frontiers candidate missions all exceed the recommended budget of $1B per mission for candidates selected mid decade and beyond.  The Survey chair, Steve Squyres, has said that they believed that clever proposing teams will find ways to fit several of these missions within that budget cap.   These missions at these prices may represent a new class of mission.  Previously, the principal investigator's budget for the craft, instruments, and operations was capped at ~$650M; the new proposed cap at $1B represents a significant increase in funding per mission.