The most important figure in the Decadal Survey report for me was buried at the back in Appendix C.  It was not until I read the journal Science's article on the survey (subscription required) that I realized its importance.

Before I get to that, it's been a week since we learned the key elements of the Decadal Survey through a Space News story based on a leaked summary.  We have been surprized by the cost cost estimates of the Flagship missions.  We heard in detail how the projected funding for NASA would support something like half the program recommended by the Survey.

During the past week, I've read most of the report and numerous summaries and commentaries on the report.  I've also watched the full question and answer period following Squyres's presentation of the report, the joint press conference with James Green, and Green's NASA update.  (Squyres was the chair of the Decadal Survey and James Green is the head of NASA Planetary Program.)

From Green's comments, it appears that it will be months and perhaps almost a year before we understand the full response to the Survey's recommendations and declining NASA planetary budgets.  Green, his staff, and the planetary community will take that time to scrub the budget, re-examine assumptions, think through mission costs, and negotiate with ESA on the 2018 Mars rover mission.

For now, though, here's what the picture looks like.  The first half of this decade will be a golden age of planetary exploration for NASA.  A number of missions are already in flight and will reach their targets or continue their studies.  Four NASA missions will launch in the next two years.  New Frontiers and Discovery missions will be selected in the next year or so for launch around the middle of the decade, and the ESA-NASA Mars Trace Gas Orbiter (MTGO) should leave Earth in 2016.

Then, if current budget projections hold, funding for new mission development will drop by approximately half around the middle of the decade.  The Flagship missions recommended by the Decadal Survey probably will not fit within that funding.  Steve Squyres said that with this funding level, the second half of the decade likely will see only New Frontiers and Discovery missions funded.

NASA and ESA had plans for a joint 2018 dual rover mission with NASA providing the launch, entry, and descent systems and a rover to cache samples for an eventual sample return.  ESA would provide its own rover to carry out sophisticated analysis of samples drilled from beneath the surface.  Unfortunately, adding the ESA rover would increase NASA's costs by approximately $1B, or a bit less than the cost of the ESA rover and instruments.  Today, even the cost of a NASA-only mission at $2.5B probably would be more than the projected budgets could afford with current budget projections

James Green, head of NASA's Planetary Science division, has said that NASA and ESA will spend the next several months  trying to craft a joint mission that fits within both agencies' budgets and meets both agencies' goals.  If that's possible, perhaps the resulting mission will be a single rover with ESA's instruments and NASA's sample caching hardware.  Whatever the solution, it will have to be designed to a cost cap.

Which brings us back to the figure I believe is so important.  The Science article pointed out that 50 years of planetary exploration have led to many "firsts": first flybys, first orbiters, first landers, first rovers for many worlds.  "But," and the article points out, "the next first is always more complicated than the last.  And greater complexity always means more expense." 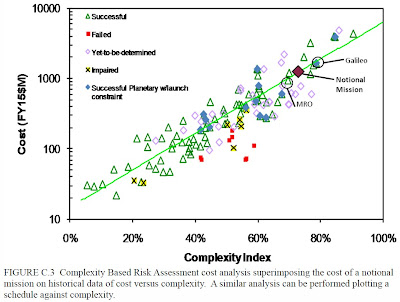 Click on the image for a larger view
The figure from the Survey's report shows the relationship between cost and mission complexity.  As mission complexity increases linearly, mission cost increases exponentially.  A mission with a relative complexity of 40% would cost approximately $100M.  Double that complexity to 80% and costs jump to almost $1B.

In a fixed budget, the key is to design to cost, with corresponding caps on the complexity of the mission. New missions extend the capabilities of previous missions in some new way: a sample return from a new region of the moon, or the first Venus lander with modern instruments, or the first mission to a Trojan asteroid.  Complexity and resulting costs are constrained by narrowly focusing the mission on only the core requirements.

New Frontiers and Discovery missions have always been planned with a design to cost philosophy with costs capped at ~$425M and ~$8650M, respectively (Principal Investigator costs for the spacecraft, instruments, and operations).  Flagship missions, on the other hand, traditionally were designed to meet a set of mission goals with the costs allowed to rise to meet those goals.

Flagship mission do not have to be designed that way.  Several researchers in the question and answer period pointed out that the original JEO proposal was for a cost capped ~$2+B mission.  NASA then asked for a more capable mission that would hit the sweet spot for maximizing science return, and the result was a $3+B mission, which the Survey estimated would actually cost $4.5B.

Cost capped missions are an intelligent way to fit more missions within a budget.  However, these missions must focus on narrower questions.  The initial cost-capped proposal that became the JEO concept, for example, had fewer capabilities to study the larger Jovian system.  Lower budgets and resulting cost capped missions will mean slower progress in understanding the solar system.

I learned one other key aspect about the Survey's recommendation this week.  In the press conference, Squyres said that the Survey concluded that the past almost twenty years focus on Mars had resulted in too little attention on the rest of the solar system.  With the exception of the relatively inexpensive MTGO mission, no missions are recommended for Mars unless they are part of a sample return sequence (which a 2018 rover mission would be).  Otherwise, the Survey believes that the goal should be a breadth of missions to many solar system locations and not return to Mars in the coming decade.

All in all, the future planetary program looks much different tonight than it did a month ago.  Since then, we've learned that future budgets are projected to be substantially lower, cost capped missions with tightly focused goals are likely to be the norm, and that Mars has lost its special status as the focus world.

With this post, barring news, I'll take a break from the Decadal Survey for a bit and look at some mission proposals.