Titan on a Budget 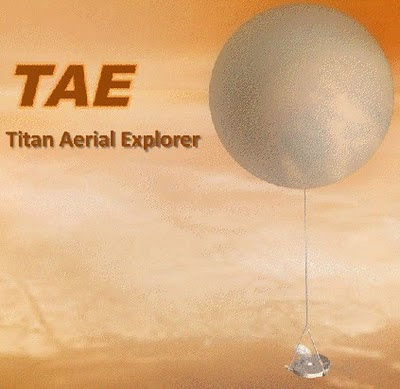 The last full proposal for a mission to Titan was the Titan Saturn System Mission with a cost of ~$3.4B for the orbiter (FY15 $s) and an additional ~$1B for the balloon and lake lander elements. (Source Titan Saturn System Mission Decadal Survey concept report)   At the time of the proposal, reviewers judged that a number of mission elements required further technology development before they would be ready for flight.  NASA and ESA tentatively gave the nod to Europa and Ganymede missions subject to the recommendations of the Decadal Survey (Europa) and a competitive selection process (Ganymede).

The TSSM reviewers emphasized that the science was excellent.  Further study of Titan would yield significant new advances in planetary research.  Recently, several groups of scientists have put forward proposals to study Titan with Discovery (~$425M PI costs) to New Frontiers (~$650M PI costs) (FY10 $s) class missions.  These missions address subsets of the TSSM goals in an effort to keep costs down.  In this post, I'll continue a series that looks at the trade offs proposed to fit missions to the Saturn system within these budgets.  (See New Frontiers to Ganymede and Enceladus and Let's Add an Instrument for previous installments.)

One proposal, the Journey to Enceladus and Titan, would study those two worlds remotely.  Little has been published on this proposal.  The spacecraft presumably would make multiple flybys of those two moons and possibly orbit one or the other.

More information is available on three other proposals:

Each of these missions attempts to bite off a significant piece of Titan Exploration at less than a quarter the cost of the TSSM mission.  TiME and AVIATR been proposed as a Discovery class missions, with the TAE to be proposed as an ESA medium class mission that perhaps has an even tighter budget.  (Different budgeting approaches makes it difficult to exactly compare NASA and ESA mission budgets.  Both agencies also allow collaboration with other nations, which can add to a mission's funding.)  To fit within these budgets, the proposers have reduced mission goals to what appears to be core minimums.

The TSSM balloon platform had goals for studying the structure of Titan's atmosphere, the chemistry of the atmosphere, and remotely studying the surface and subsurface.  Both TAE and AVIATR drop the TSSM's mass spectrometer, which would have focused on detailed measurements of atmospheric chemistry.  In it's place, both have one or more instruments that would partially replace the science that a mass spectrometer could have performed.  However, the organic chemistry of Titan is one of the strongest scientific draws of Titan.  This key area of study would have to be fulfilled by other missions. 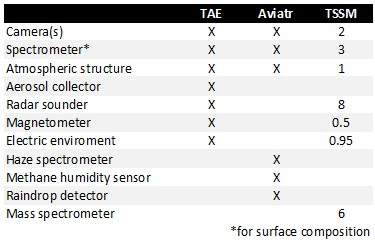 Instruments proposed for the Titan Aerial Explorer (TAE), the AVIATR plane, and the Titan Saturn System Mission (TSSM) balloon platform.  Proposed masses for the TSSM instruments shown for comparison; actual masses of instruments for the TAE and AVIATR missions likely would be different.
In the case of TAE, the proposers might have retained the mass spectrometer by dropping the subsurface radar sounder.  (In the TSSM proposal, the mass spectrometer had a mass of 6 kg compared to the radar sounder's 8 kg.)  The TAE mission, however, would focus on understanding the methane cycle (analogous  to the water cycle on Earth), and the proposers evidently decided that detecting subsurface reservoirs of liquid methane was more central to that goal than atmospheric chemistry.   In the case of the AVIATR plane, mass and space constraints would be tight, and the radar sounder would be dropped in addition the mass spectrometer.

The instrument trade offs are less dramatic than the trade off on data rates.  The TSSM balloon platform would have returned 300Gb-1.3Tb of data using the orbiter as a relay.  The expected data return from the AVIATR mission would be ~2GB.  By analogy to previous balloon-only missions to Titan (Titan and Enceladus $1B Mission Feasibility Study), the TAE mission might return a similar amount of data.  By forgoing the cost of a data relay orbiter (perhaps an additional $200M based on costs in the Decadal Survey mission concept reports), these missions would forgo significant quantities of data.  A simple Saturn orbiter returning to Titan every few weeks likely would not have the relay capabilities of the TSSM orbiter by perhaps an order of magnitude or two, but it would dramatically increase the data return.   Since both missions have goals that focus on surface imaging, this is a major reduction in capability compared to what an eventual Flagship mission could do.

Editorial Thoughts:  I favor flying one or two Discovery to New Frontiers-class missions to Titan in the next decade (assuming that the Decadal Survey does not resurrect the TSSM mission, which I consider doubtful given its costs and technology readiness issues).  These missions would likely be incremental.  Eventually, we would need to fly a full Flagship mission, perhaps in the 2020s.

In the next installment, I'll look at the trade offs to enable lower cost Titan lake landers.