As part of its analysis, the Decadal Survey commissioned 25 mission studies to define potential missions it would select its final list from.  The full list of mission studies, plus three technology studies to enable missions in the 2020s and beyond, have been posted (http://sites.nationalacademies.org/SSB/SSB_059331).  As one poster at Unmanned Spaceflight put it, this is a candy store for those interested in future planetary missions.

In future entries, I'll be summarizing the reports (a typical length is around 30 pages) and where appropriate comparing them to each other and to past missions and other mission concepts.  Generally, each report will get its own entry, but in the case of similar mission types, I'll compare the mission concepts in a single entry.  I'll also combine the summaries with my continued list of the five missions that I find most compelling for the coming decade.

To kick off the process, I'll post a table comparing the missions for cost and mission flight times (be sure to read the notes on the table for important caveats).  In going through this list, I was happy to see that a large number of missions are reasonably close to the fully burdened New Frontiers mission cost of ~$1,350M inflated at 3% per year for Fiscal Year 2015 costs.  Another group of missions could probably fly at a New Frontiers mission and a half budget.  Assuming that the Max-C rover, the Mars Trace Gas Orbiter, and three Discovery missions fly in the next decade, this would allow two to four of the sub-$2B missions on this list to fly. 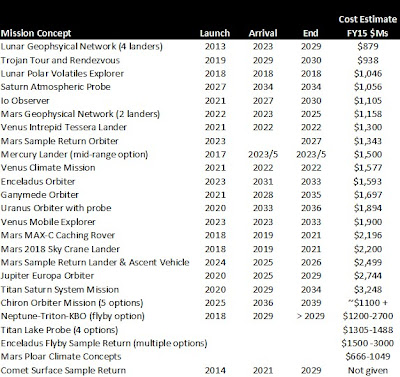 Click on the list for a larger version.
Notes on the table:
The next blog entry will describe the two mission concepts that together would be for me be the third most compelling mission for the coming decade.