This blog entry continues the series to pick the 5 missions that I personally find most compelling for the next decade.  I'm under no illusion that I will persuade anyone (especially anyone who influences government spending).  However, I find a well argued (and I hope these will be) argument to help me form my own opinions.  Please provide your opinions, too, in the comments.  You can find the earlier installments of this series at these links:  Mars Caching Rover and Venus Climate Flagship. 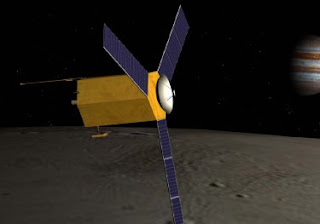 Concept for a Ganymede Orbiter
Over the last fifteen years, we've come to learn that icy worlds with internal oceans appear to be common in the solar system.  At scientific conferences, sessions are devoted both to individual worlds such as Enceladus and Titan where we have newly arriving data and to comparing these worlds with the moons of Jupiter, Triton, and Pluto .  The AGU conference this December will have sessions on "The Potential for Water-Organics Interactions on Titan," "Eyes on Enceladus," "The Amazing Nature, Origin, and Evolution of Outer Planet Satellites", and "Icy Ocean Worlds" to name just a few.  (As a side note, I appreciate the AGU scheduling these sessions this year so that they largely don't overlap with the sessions on my field of study.)  For the first two picks in my list of compelling missions, I chose missions that would advance the comparison of terrestrial worlds with atmospheres.  For my third and fourth picks, I my choice is for two missions to advance the comparison of icy ocean moons.

The Decadal Survey's list of missions it considered (it's made its selections, but we won't learn of them until next March) is rich with missions to pick from.  There are the Flagship missions to Europa and the Jovian system and to Titan and Enceladus at the high end with price tags of $2.7B and $3.2B, respectively.  (All costs are from the just released mission studies and were stated in the reports in FY15 dollars.  The two Flagship missions have been studied in depth, and their costs probably have greater fidelity than the other costs listed, which represent early assessment costs developed as part of the mission concept studies.)  At the low end, there is an option for an Enceladus multiple flyby mission for $1.4B.  In between are Enceladus orbiters ($1.6B - $2.4B), a Ganymede orbiter ($1.35B - $1.7B), and Titan lake landers ($1.3B - $1.5B).  My choices for the third and fourth missions on my list would be one to explore the icy moons of Jupiter and one to explore Titan and Enceladus.

Ideally, NASA would fly the Europa Jupiter System Flagship mission along with a capable Enceladus orbiter (that would also do multiple Titan flybys) and a Titan lake lander.  However, this combination would cost almost $6B.  Combine that with a $3-4B investment in Mars missions (which I predict will be the Decadal Survey's top priority) and a couple of Discovery missions, and that's pretty much the entire budget for missions next decade.  I also think that the Flagship missions may face have a couple of programmatic challenges.  First, NASA's last two choices for Flagship-scale missions, the Mars Science Laboratory and the James Webb Space Telescope, both experienced large cost overruns.  The latter mission is facing another large cost overrun, and that may make the Survey and NASA skittish about recommending another large mission.  The second challenge is that NASA apparently does not have the plutonium 238 on hand to fly a Flagship mission.  They apparently will receive sufficient Pu-238 if Russia resumes sales or if Congress funds new production.  Will NASA want to bet a large chunk of its planetary mission budget on these two ifs?

I hope that these issues can be overcome.  If they can't, my next three posts will look at the lower cost mission alternatives presented in the Decadal Survey's studies for studying Jupiter and Saturn's icy ocean worlds.