The Venus (VEXAG), Mars (MEPAG), outer planets (OPAG), and small bodies (SBAG) assessment groups all met in the last month.  This kind of concurrency in these meetings is unusual and presents an opportunity to provide an update on future missions across the entire range of solar system (ex the sun itself).  What follows are key tidbits gleaned from the presentations that have been posted on the web (see below for links).

Steven Squyres presented an update on the Decadal Survey at the MEPAG meeting.  Squyres reported that the first draft of the report and recommendations has been written an submitted for review.  To quote directly from his presentation: 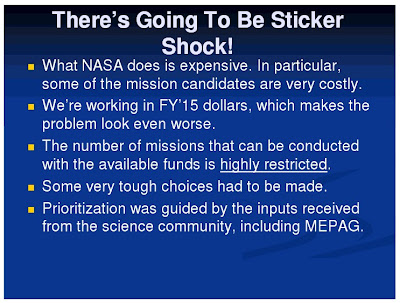 (Editorial note: My take on the "highly restricted" and "tough choices" is that one of the two flagship class missions widely discussed -- the MAX-C Martian rover and the Jupiter Europa Orbiter -- may not be recommended.  If so, I'd place my bet on a Martian rover being recommended.  To not do so would effectively end a very successful two decades of Martian exploration and lead to JPL losing the expertise it's built up on Martian entry, landing, and descent and rover technology.)

The first public release of the Survey's recommendations and report will occur at the Lunar and Planetary Science Conference next March 7-11.

While not in the presentations, NASA does not have an approved budget for FY11, which began on October 1.  Congress is late with almost all appropriation bills this year, leaving NASA to operate on a continuing resolution.  Frequently when this happens, a large number of agencies receive their final budgets as part of an omnibus bill.  Usually, the new budget ends up looking much like the previous year's budget since there is not the time to consider each agency in detail.  For planetary explortion, this could represent a loss of the substantial budget increase (~11%) in the President's proposal submitted to Congress earlier this year.  Carried forward through the next decade, this increase could almost pay for an additional New Frontiers mission.  (You may have heard that Congress recently approved NASA's "budget."  This was actually an authorization bill, which is a policy statement on Congress' goals for the agency, which is critical given the changes in the manned spaceflight program this year.  Funds are actually appropriated in seperate spending bills.)

Funding for the restart of plutonium-238 was requested in the President's budget proposal, with costs to be equally shared by NASA and the Department of Energy (DoE).  The Senate's version of the DoE budget would require NASA to carry the entire $75-90 M cost.  If the eventual Congressional appropriation goes with the recommendation, NASA looking to cover the entire cost out of its budget, but "significant impact to several programs will be felt."

NASA continues to move forward to enable the Jupiter Europa Orbiter if it is recommended by the Decadal Survey.  The radiation and planetary protection concerns (the spacecraft would eventually crash into the surface of Europa, and NASA doesn't want to contaminate it with Earth organisms) makes instrument designs especially challenging.  In an unusual step, NASA will hold a two stage selection for instruments.  In the first stage, it will select two or more concepts proposed by researchers for each instrument category.  Those concepts will then receive funding for end-depth design work leading to a final selection.

NASA received several dozen proposals to consider for its next Discovery mission selection, indicating that the scientific community is not running out of ideas for relatively low cost missions. 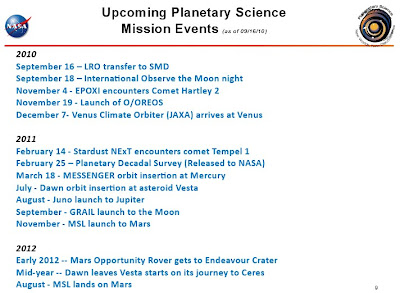 Links to meeting presentations:
OPAG
MEPAG
VEXAG
SBAG
As an additional note, China launched its second lunar mission yesterday.  Per a SpaceDaily article, China hopes to achieve its first robotic lunar landing in 2013 and a sample return in 2017.

Email ThisBlogThis!Share to TwitterShare to FacebookShare to Pinterest
Labels: a - State of the Program(s)