Thoughts on the Most Compelling Proposed Planetary Mission

At the moment, news for future planetary missions is scarce as the U.S. waits for the results of the Decadal Survey.  (Other nations continue their own planning cycles, but news is scarce there, too.)  The Decadal Survey has published a list of 25 missions it is considering for the next decade.  I thought that I would take the next few blog entries to pick the five missions from that list that I find most compelling.  I'm under no illusion that I will persuade anyone (especially anyone who influences government spending).  However, I find a well argued (and I hope these will be) argument to help me form my own opinions.  Please provide your opinions, too, in the comments.

There are many ways to decide on what would be a compelling mission.  One would be on the vicarious thrill of exploration.  On this basis, I would favor missions such as the Venus SAGE lander, the AVIATR Titan plane, and the Argo Neptune-Triton-KBO mission.  (All would also provide great science.)  However, nations chose to fund these expensive mission primarily on their scientific return.  So I have taken that as my criteria.  Which set of missions would most fundamentally advance our understanding of the solar system? 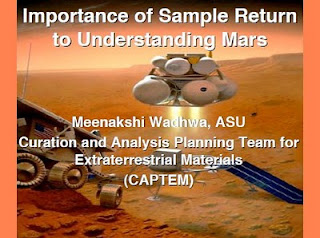 Click here to go to the presentation
A recent paper in the scientific journal Astrobiology, New Priorities in the Robotic Exploration of Mars: The Case for In Situ Search for Extant Life (subscription or purchase required), has got me rethinking the priority for a Mars sample return.  Mars has been the major focus of NASA's planetary program for the last 15 years.  With the recent cooperative agreement, it has also become a major focus for ESA.  Review board after review board for the last 30 years have concluded that the highest priority for Mars exploration is to return samples to Earth (see, for example, the 2003 Decadal Survey report).  The mission has been recommended for flight at the earliest opportunity, but NASA's budgets have never permitted the mission to begin development.

There have been scientists who recommend a slower approach.  Mars is highly diverse and we have explored its surface in only six places, and landing safety concerns limited our choice of places to explore.  Samples of past or present life are likely to be hard to find.  Instead of rushing to a sample return, these scientists argue, fly a number of landed missions, probably most of them rovers, to find the best place to return a sample.  This, in a nutshell, is the argument the authors make in the New Priorities in the Robotic Exploration of Mars paper.

At least based on presentations at meetings and the roadmap adopted by the Mars science community (principally through MEPAG), this appears to be a minority view.  Most of the community apparently has decided that we know enough about Mars to pick a very interesting site.  The samples returned from that site when analyzed with Earth-based instruments (most of which would be larger than the rover collecting the sample and some of which would be larger than the launch vehicle -- size and power counts for sophisticated study at the scale of individual rock grains) would greatly deepen our understanding of the early history of terrestrial planets.  Only Mars preserves that early history on a body that had both a significant atmosphere and liquid water.

Long term readers of this blog know that I am a skeptic on Mars sample return.  Not because I don't think the science is absolutely compelling -- it is -- but rather because I doubt that Congress will fund a $6B+ program for robotic exploration.  I've come to reevaluate that position, though.  Congress has funded the James Webb Space Telescope to the tune of over $5B  (but at the cost of the astronomy program foregoing many other missions).  Also, events seem to make this the time to move forward:

So, I have come to decide that moving towards a Mars sample return with the 2018 Max-C rover/ExoMars mission is the most compelling mission to me on the list of missions under consideration by the Decadal Survey.  This mission depends on an orbiter being launched by 2016 to act as a communications relay; the Mars Trace Gas Orbiter is currently slotted for this role.  Together, the two missions would cost NASA probably $3B, perhaps as much as $4B with inflation and cost overruns (ESA would also make a substantial contribution for the orbiter and the ExoMars rover).  This would represent a quarter to a third the expected NASA planetary mission funding for the next decade.

There is the risk that the current estimates for cost will turn out to be wildly optimistic and the true costs will eat up a large portion of the planetary science budget.  After approval, politicians could cancel the mission to save money.  It happened with the Venus Orbiting Imaging Radar mission in 1981 (the eventual Magellan mission was less capable), the Comet Rendezvous and Asteroid Flyby mission (ESA's Rosetta eventually filled this slot), and almost happened to the Galileo mission.

Given these risks, I favor a go slow approach.  Fly the Max-C and ExoMars rover in 2018.  Wait until we know there is a compelling set of samples waiting on the surface for pickup before committing to the next mission in the sequence (see this blog entry for a description of the three missions needed to return a sample to Earth).  If the 2018 mission fails or is skunked, launch another rover to find and cache a compelling set of samples.  Under this approach, the earliest a sample could be returned would probably be 2028 (instead of the current strawman for 2026).

Going with a sample return mission isn't without its risks, both technically and politically.  However, the return seems to me to be greater than any other mission on the list.

I hope to hear your opinion whether or not you agree or disagree.