A single presentation slide has been posted on the planetary Decadal Survey webpage listing the schedule towards the public release of the recommendations (next spring) and final document (next August).  (Slide reproduced below.)  The draft report and recommendations should now be with reviewers.  The Surveys traditionally have run a tight review process with no leaks, so the public will have to wait six months to learn what the next decade's program will look like (assuming budgets come through and no major cost overruns).

However, it's fun to speculate what the recommendations might look like.  With that in mind, I'll publish my best guess on what the Survey might recommend.

The last planetary Decadal Survey had four themes to guide mission selection.  I have not seen anything that I predict will replace these priorities althought they are likely to be updated: 1. The First Billion Years of Solar System History; 2. Volatiles and Organics: The Stuff of Life; 3. The Origin and Evolution of Habitable Worlds; 4. Processes: How Planetary Systems Work.

Two key missions from the last Survey have yet to receive formal approval: an Europa orbiter and Mars sample return.  Both remain highly relevant to the priorities listed above.  Both I think are likely to be recommended in the next Survey.  (Both are also expensive, so this is the prediction that I have the least confidence in.)  Titan and Enceladus have increased in importance, but technology is not yet ripe for a multi-billion dollar Flagship mission to these targets.  I predict that the Survey will recommend a lower cost missions to these moons as a gap filler in the next decade.  Scientist-led Discovery and New Frontiers missions also are likely to remain a priority to balance out the program with missions to additonal targets.

Based on these assumptions (and some will be proved wrong), here is a program that would address them and that would fit within the current budget adjusted for inflation over a full decade (costs are either based on publically published numbers or are swags (MTGO and Titan/Enceladus): 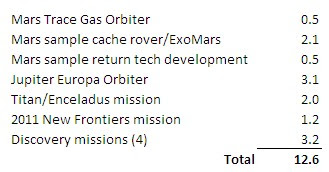 Some notes on this possible program:

The Mars missions would provide a head start on a Mars sample return.  However, I would not start the subsequent elements of the return until a cache is ready on the surface of Mars with samples known to be high priority

If budgets prove tight, I would cut the Jupiter Europa Orbiter back to ~$2B to focus only on the most urgent measurements (and sacrifice a good portion of the Jupiter system science).  A Discovery mission might also be cut.

In this thought experiment, the Titan/Enceladus mission would a PI-led mission that would substitute for a second New Frontiers mission in the decade.  The suggested budget would cover the cost of a New Frontiers-class orbiter and a Discovery-class in-situ element such as a lake lander or a plane.  What might be actually proposed by the winning PI might be quite different.

The 2011 New Frontiers mission would be selected from the three missions currently in competition: a Venus lander, a near Earth asteroid sample return, or a lunar sample return.

I have been impressed with the creativity of the Discovery mission proposals and suggest four missions in the coming decade.  Now that NASA no longer requires the launcher to be paid out of the PI budget, capable missions should be able to be flown.  The PI for the proposed Io Volcano Observer, for example, has said that the previous budget limits didn't quite work, but that the new budget limits would fully fund this mission.  (The budget suggested, though, is based on NASA's full cost, which includes launchers and other items.)

There are many losers in terms of exciting and important missions that wouldn't be included in this guess at what the Survey might recommend.  The two that I personally would most regret not seeing would be the proposed Argo Neptune-Triton-KBO mission and a Mars network mission.

When the Survey publishes its recommendations, I'll come back and score my predictions.  I hope I do better here than I have done picking stocks :> 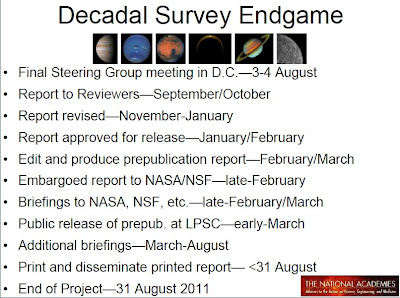