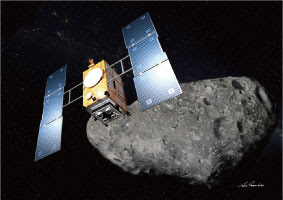 Source: JAXA
Correction: A reader corrected the budget situation: So far, the Ministry of Edcuation, Science ... approved the mission. However the budget allocations are decided by the Ministry of Finance and the parlament. Usually at Dec. or January we know Jaxa´s next budget.

The Japanese government has approved the Hayabusa 2 mission that will attempt a second near Earth asteroid sample return.  The mission will launch in 2014 to visit the carbon rich (and believed to be a sample of the early primitive solar system) 1999 JU3 asteroid, which is believed to be one kilometer in diameter.  The samples would be collected in 2018 and returned to Earth in 2018.  A number of engineering modifications are planned to the Hayabusa 1 design to take advantages of lessons learned from that mission.

This mission has similar goals to the OSIRIS-REX proposal in the current NASA New Frontiers competition, especially in the goal to sample a body believed to be carbon rich.  The spacecraft would visit different a different asteroid (1999 RQ36).  If both missions fly, we would get an idea of the diversity of these primitive asteroid fragments.

For more information, check out the article at Spaceflightnow.com or the official Hayabusa 2 website.