In this blog, I normally try to stay away from advocacy in the belief that there are already plenty of blogs that focus on political advocacy.  In this instance, I will break that rule and suggest that if you are an American citizen, that your write your senators and representative to encourage funding for the restart of Plutonium-238.  (If you aren't an American citizen read on anyway, there's some interesting information here.)  This is in a support of a letter writing campaign being initiated by the Division for Planetary Sciences of the American Astronomical Society.  Their site provides a suggested letter and a related site provides background on the Pu-238 problem. Last year, Congress deleted proposed funding for the restart from the budget.  The planetary science community appears to be concerned that the same could happen again this year.

The chart below neatly summarizes the problem.  NASA has depended on Pu-238 to power missions whereever sunlight is irregular (lunar stations), faint (the outer solar system beyond Jupiter), or solar power is impractical (the Viking landers and the Mars Science Laboratory).  Unfortunately, the United States has not produced new Pu-238 supplies for over two decades, and stockpiles are running low.  Russia had been selling its Pu-238 stockpile to the United States, but has cancelled the contract.  Even if the contract is renegotiated (and I've not seen any news on this since last December), NASA would have sufficient Pu-238 for an upcoming Discovery mission, the Jupiter Europa Oribiter, and one other small mission (the chart below lists the Intenational Lunar Network mission, but the Decadal Survey may or may not priortize that mission over other missions). 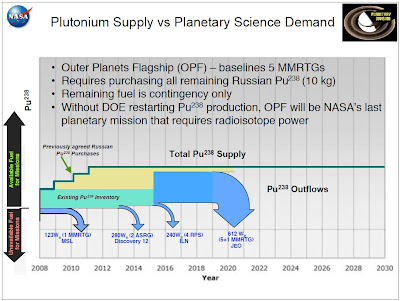 From a March 2010 Decadal Survey update
Without the Russian Pu-238, NASA would have to power the Jupiter Europa Orbiter using a new, yet-to-tested-in-flight ASRG power source that could use roughly one quarter the Pu-238 currently planned for the mission.  NASA, however, is reluctant to bet a $3B+ mission on untried technology.  By my reading of the situation, if NASA were to take the gamble, it would have sufficient Pu-238 for that mission and perhaps an additional Discovery-class mission beyond the two small missions included on the chart.

Without a restart of Pu-238, a future flagship Titan orbiter might not be able to fly (solar panels for that class of mission at Saturn would be enormous, although smaller orbiters could use solar panels).  Long-lived missions to explore the atmosphere and surface of Titan require Pu-238.  The proposed Argo mission to Neptune, Triton, and a Kuiper belt object also would require Pu-238 as would the Titan Mare lander, the Titan AVIATR plane, the Io Volcano Observer, a lander that moves to different locations on a comet's surface, and a Trojan asteroid multiple flyby-orbiter-lander.  Several missions would be enhance by a Pu-238 power supply including a proposed comet coma sample return, a Mars polar lander, Venus balloon platforms, and probably many missions we've yet to hear of.

Editorial Thoughts: I've said in previous blogs that the most important decision facing the Decadal Survey is whether or not to prioritize a Mars sample return mission (which likely would require nearly half of NASA's planetary program).  The second most important decision may be which missions to prioritize in the face of a finite Pu-238 supply -- Congressional funding is not guaranteed.  The next Discovery mission may be powered by an ASRG (I think it will probably be; I think NASA would want to have the technology flight tested).  If the Jupiter Europa Orbiter flies with ASRGS and there's no future production, then there will be sufficient Pu-238 for just a few, maybe one or two, Discovery-class missions.  Which to prioritize would be a key question.  My vote would be for in-situ missions to Titan and perhaps Argo, but many worthy targets deserve consideration.

If you are an American citizen and would like to see a vigorous future planetary program that includes missions that can't be powered by solar panels, please write your congress people.  The link to the site is http://dps.aas.org/public_policy/docs/Pu-issue-letter.

Email ThisBlogThis!Share to TwitterShare to FacebookShare to Pinterest
Labels: Plutonium