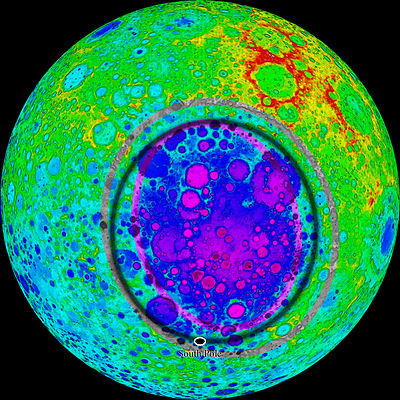 The SPA basin lies almost entirely on the far side of the moon.  MoonRise would be the first mission to collect samples from that hemisphere.   In this topographic map, red indicates high elevations while purple indicates low elevations.  From Wikipedia based on Kaguya data.
Late last year, NASA announced three finalists in the selection for the next New Frontiers mission.  Two of the three missions, the SAGE Venus Lander and the OSIRIS-REx asteroid sample return mission have previously been discussed in this blog.  This time, I'll describe the goals for the third finalist, the lunar MoonRise South Pole-Aitken (SPA) basin sample return.
Unfortunately, I largely will only be able to describe goals.  As with most mission proposals for the New Frontiers and Discovery programs, the proposing teams are keeping the implementation details to themselves.  It's common for these missions to be proposed several times, and there's no point to giving potential competitors ideas.  We do know that a single lander is being proposed (unlike a previous New Frontiers proposal to sample the SPA basin) and that there will be a communications satellite.  The goal is to gather 1 kg of lunar soil, which is expected to contain 10,000 2-4 mm particles, >3,000 4-10 mm framents, and "a significant number" of small rocks >1 cm.  Because large impacts spread material across the lunar surface and small impacts churn the local soils, it's believed that a single soil sample will sample a diversity of sites from within the basin.  Thanks to the plethora of satellites that have and are studying the moon, the proposers think that they can pick a site to optimize the value of that heterogeneous soil sample.  No rover would be needed to collect samples.
That's the what of the mission, but what about the why of the mission?  The SPA basin is the largest of the impact craters on the moon (and possibly the solar system) and was one of the earliest of the large lunar impacts (see Wikipedia article).  It is so large, that several later good sized impacts lie within it.  One of the key questions for the early history of the terrestrial planets has been the nature of the large bombardments of the planets near the end of their formation.  There's a debate about whether there was a single dramatic pulse of impacts or whether they were more spread out over time.  Samples from the SPA basin can date the impacts within the basin. Coupled with information on the dates of impacts elsewhere on the moon from samples collected in the 1970s, this mission could help to resolve this debate or take it in new directions.
A second goal for this mission is to use the samples to better understand the effect the initial and subsequent impacts had on the development of early planetary crusts.  Samples will allow us to determine how deeply the impacts penetrated the crust, the thermal state of the moon at the time of impact, and provide ground truth for the remote sensing data on the current surface of the basin.
The third goal is to use the basin to collect samples from various depths of the lunar crust and possibly mantel.  The cumulation of large impacts within the basin means that samples are likely to have been thrown up from various depths beneath the surface.  Understanding how terrestrial planets differ with depth and across their surface has long been a goal of terrestrial and planetary science.
You can read about the goals of this mission in much more depth in the two following two-page abstracts from the last Lunar and Planetary Science Conference:
Editorial Thoughts:  The New Frontiers selections are highly competitive and it's not surprising that three finalists are all scientifically strong.  Any one of them will make a significant contribution to planetary science.  OSIRIS-REx would provide a major boost to the study of primitive bodies in the solar system and would build upon a number of previous missions and compliment the Rossetta comet mission.  SAGE would re-invigorate the study of the Venus surface and could be an American contribution to a series of missions to study Venus from several space agencies.  MoonRise would provide ground truth for the number of missions that have recently flown to the moon and the several that are planned in the coming decade.
Given that the science potential of all these missions would be high, the final selection is likely to be made on the basis of technical maturity, costs, and programmatic risks.  Unfortunately, the public has no insight into these issues and therefore has no way to handicap the selection.  The current date for the selection is April or May of 2011.