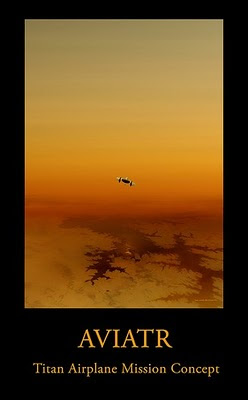 Click on image to go to site for full poster plus additional posters.
A previous post looked at the proposed AVIATR Titan plane proposal.  This mission, which is currently contending for the next Discovery mission slot, would use an airplane to study the surface and atmosphere of Titan.  Unlike previously proposed balloon missions that would drift with the winds, this mission would be able to send the plane to survey specific surface targets such as river systems, lakes, and mountains.  The plane would be able to fly faster than Titan rotates, so that it would always remain on the sunlit, Earth-facing side of Titan.

A video of a presentation on the mission from a meeting last January has been posted on the web.  Together with a recently posted meeting abstract, more information on the science of the mission is now available.  Some key facts:

Compared to previously proposed balloon missions (both the 2006 $1B Box study and the Titan Saturn System Mission (TSSM) proposal), this mission has some compromises.  The science payload is about half of what the balloons would have carried (see table below).  Some key instruments such as a mass spectrometer to study atmospheric composition and a radar sounder are not included in the AVIATR proposal.  The TSSM balloon mission would have returned far more data, but that was contingent on the presence of a flagship orbiter to relay data.  The data rate of the AVIATR mission appears to be similar to that of the $1B Box study balloon platform, which would have sent data directly to Earth. However, almost twice as much data would be returned by AVIATR because the balloon would spend half its time facing away from Earth when it would have been on the night side of Titan. 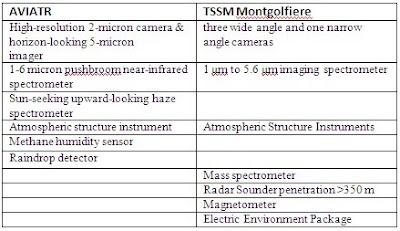 Instruments proposed for the AVIATR plane and the TSSM balloon platform
On the other hand, being able to actively manuever gives AVIATR some key advantages over a balloon.  When AVIATR reaches a target location, it can climb high and fly a grid pattern to take context images of the entire area.  Then it can drop down to ~3.5 km to take high resolution images of portions of the area.

To make the most use of the 2GB of data return, AVIATR would send thumbnail images back to Earth.  Scientists would then select the most interesting images for full transmission, and AVIATR would use data compression to make maximum use of the bandwidth.  A similar scheme was used for the Galileo mission, which had to deal with a similarly constrained data rate due to a malfunctioning antenna.

The cost of the AVIATR mission is described as either Discovery class (~$800M) or New Frontiers class (~$1.2B).  (These are fully burdened costs derived from dividing the proposed decadal budget for these programs by the number of expected missions.  The costs include the ~$450M and ~$650M, respectively, allocated to the principal investigator plus launch vehicle and presumably other overhead.)  The $1B Box study estimated the cost a standalone balloon mission at ~$1.4B using what appears to be similar accounting methods but in FY06 dollars.

Editorial Thoughts: I do believe that we should continue the exploration of Titan and Enceladus in the coming decade.  Currently, the flagship mission slot is given to the Jupiter Europa Orbiter over the Titan Saturn System Mission (a decision I agree with, but one the Decadal Survey could overturn).  In my opinion, portions of the TSSM proposed mission should be flown: An Enceladus multi-flyby (and possible orbiter) mission that would also study Titan in a series of flybys, a Titan lake lander a la the proposed TIME mission, and either a Titan balloon or airplane mission.  There are indications that all of these components individually could be in the Discovery to New Frontier mission class.  Ideally, this would be an international effort with more than one space agency contributing the mission elements. I would like to see the balloon or plane carried to Titan by the Enceladus Saturn orbiter that would also act as a data relay and enable substantially more than 2GB of data to be returned.

If a balloon or plane mission were to be flown, I'd prefer the plane mission.  The plane could better study the surface by flying to chosen locations of high interest rather than depending on the fate of wind direction.  To partially make up for the limited atmospheric instruments in the plane mission, the Titan lake lander could perform atmospheric chemistry measurements during its descent.