The two spacecraft planned for the Europa Jupiter System Mission -- NASA's Jupiter Europa Orbiter (JEO) and ESA's Jupiter Ganymede Orbiter (JGO) -- will focus on in-depth studies of those two moons with intensive studies conducted from orbit around their respective targets.  Both craft will spend 2-3 years in orbit around Jupiter before settling into their final orbits around their destination moons.  During that time, they can replicate science that Cassini has been performing for the Saturn system.  Jupiter has already had one orbiting spacecraft, Galileo, but it had mid-1970's technology instruments and a crippled antenna that reduced the data return to a bare trickle.  These two planned missions will have 2010's technology instruments and high data rate X-band and Ka-band communications.

This is the first of several blogs that will look at the science these two missions can perform prior to their ultimate investigations in orbit around their respective moons.  The missions studies that previously have been carried out focused on the studies from orbit, with only minimal attention to studies of the moons from flybys and of Jupiter from orbit.  That is beginning to change as the missions undergo further definition.

I believe that looking at what these missions can do prior to their Europa and Ganymede orbit science campaigns is instructive for three reasons.  First, both missions can carry out synoptic studies of the weather of Jupiter.  The Juno mission will study the interior of Jupiter and the weather in slices that will be tiny both in spatial and temporal coverage.  These two follow on missions can study the entire planet's weather for years.  Second, Io and Callisto will be studied only from flybys and distant observations.  The MESSENGER flybys of Mercury has shown what kinds of science can be performed by a modern suite of instruments.  And third, the present mission concepts are not guaranteed to fly.  NASA's mission is subject to prioritization by the Decadal Survey.  ESA's mission is in competition with two attractive astronomy missions for funding.  Supply problems for NASA with plutonium-238 to power their craft may force a radical restructuring of the mission with the result that more focus goes to remote studies.

The February OPAG meeting had several presentations on planning for the current mission concepts, with greater focus on NASA's mission (OPAG is a NASA-chartered group).  The presentations state that the current mission designs are preliminary and have had limited attention.  They suggest that the oribital tours are likely to be considerably refined as mission definition continues. 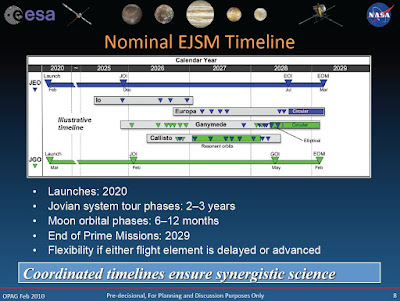 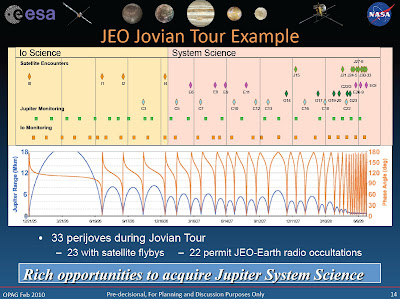 Example JEO tour showing satellite encounters and distance and phase angles from Jupiter.  This tour design includes an Io science campaign (four science flybys) and a system science campaign that includes numerous remote observations of Jupiter and Io as well as flybys of the other Galilean moons.  JEO will also conduct magnetospheric studies (not shown). (From http://www.lpi.usra.edu/opag/feb2010/presentations/GreeleyEtal.pdf) 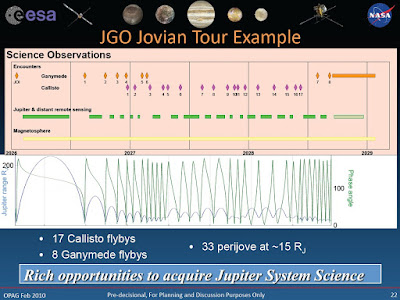 Example JGO tour with Ganymede and Callisto flybys and extensive monitoring of Jupiter and the magnetosphere. (From http://www.lpi.usra.edu/opag/feb2010/presentations/GreeleyEtal.pdf) 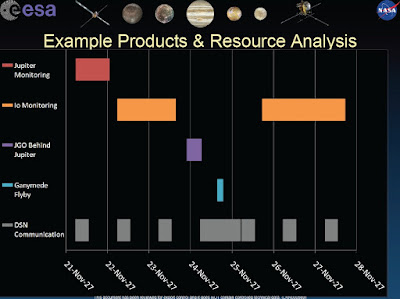 Example activities for one JEO orbit that includes a flyby of Ganymede and remote monitoring of Jupiter and Io.  The JEO and JGO spacecraft will be able to probe the atmosphere of Jupiter by tracking each other's radio waves as they pass behind Jupiter as seen by the other craft.  (From http://www.lpi.usra.edu/opag/feb2010/presentations/LockScienceScenarioModeling.pdf)
A science definition team (SDT) has been looking into issues relating to the current mission design.  Some items they suggest for further consideration include:


Editorial Thoughts: Either of these missions has the potential to do considerable Jupiter system science.  That science could be considerably enhanced if the Jupiter tour prior to beginning the orbit of the their target moons was extended.  This has been propsosed for JEO if the JGO mission were to launch later than expected.  The synergistic science opportunities with two orbiters is great enough that NASA is willing to consider lingering longer in orbit around Jupiter to wait for JGO rather than rushing to orbit Europa.  Should the JGO mission not be selected, extending the JEO Jupiter tour would make good science sense.  An extra year or two could enable a number of additional flybys of Ganymede and Callisto to partially make up the loss of the science from the JGO mission.  However, NASA has to balance this against the increased risk of a malfunction on the JEO craft if it delays its final science campaign at Europa.